The weather has been trying its hardest to prevent me from getting out in the field of late, and this past week it nearly succeeded, but I did manage to get out and complete a survey on Thursday morning. It had rained for most of the previous few days, so I chose to survey one of my wintering bird survey sites that wouldn't be too treacherous under these conditions.
This particular pastoral farmland site in northwest Lancs does receive a lot of disturbance from people walking their dogs, as it is right next to a small market town. However, the combination of the wet weather creating some floods on some of the fields, and the fact that the farmer is now grazing the fields with some sheep, has reduced the disturbance considerably, and it will be interesting to see what effect this will have on my survey results for the remainder of the winter.
I set off to walk to my first VP on this Thursday morning under full cloud cover, with a 3 - 4 NW wind. As I said before, the site is next to a small market town, and as a result the hedges closest to the houses were full of 'chirping' House Sparrows. Hard to estimate how many, just a 'HS' with an underscore on the map, to show calling House Sparrow.
There were a few wintering thrushes, in the form of two Fieldfares, 21 Redwings and a Song Thrush, but once again it was the number of Blackbirds that topped the score sheet, with 24 recorded! Another high scoring species, in terms of numbers, was Magpie, and I had 41 of these black, blue, purple, green and white, iridescent corvids.
Three Stock Doves, five Long-tailed Tits, a Siskin, 17 Goldfinches, a female Kestrel and a Goldcrest are all worth mentioning, but I didn't have much else.
Yesterday morning I was back at the feeding station to top up, and have a look at the wetland, and once again it wasn't fir for ringing. The wind strength was okay, a light south-easterly, but it was wet, and it was forecast to be wet on Sunday as well. So, it was another case of feeding station blues.
Having said that, the feeders were very busy, and it was nice to be topping the monster 20 kg seed feeders up to a backdrop of calling Tree Sparrows!
Robert and I had a quick look on the wetland just before the rain came in, and it was pleasing to note that the Teal were back, and numbered 250. Other wildfowl present included 12 Shovelers, 45 Wigeons and ten Mallards. There was a flock of twenty Lapwings on the margins of the wetland, along with a couple of Common Gulls.
Below are a few pictures of the wetland with Lapwings, Wigeon and Teal. 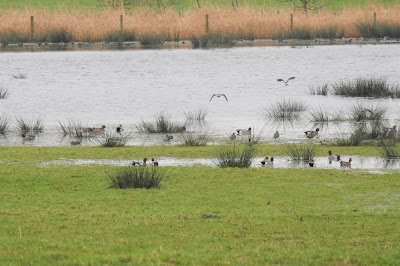 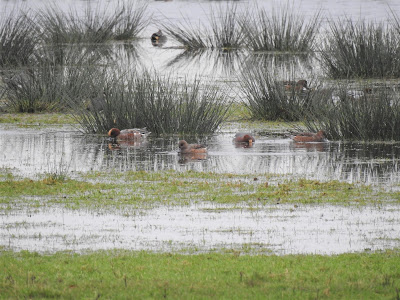 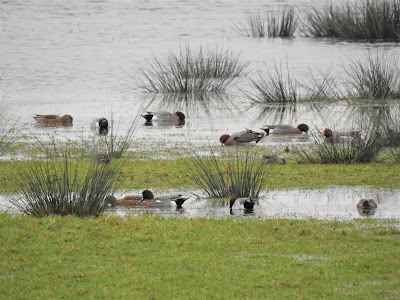 We didn't have a look in the woodland, but a flock of 30 Redwings and four Fieldfares were making their way across the tree tops, and a Jay flew across the track.
Dare I say it, the forecast isn't looking too bad for this coming week, so hopefully I'll get plenty of surveying done, and maybe I can get rid of those feeding station blues with a ringing session next weekend. Fingers crossed!