I've blogged about the Galwaithegate, or the Galloway Road, or the Old Scotch Road, to give it all its names, before, and I'll come back to it later.
One of the five wintering bird surveys that I am undertaking throughout the 2021/22 winter, is an exciting project on a farm in the Fylde that is attempting to obtain The Wildlife Trust's Biodiversity Benchmark.  The Wildlife Trusts’ Biodiversity Benchmark is the only standard that certifies management of a business's landholdings for wildlife. It tests the design and implementation of a business’s management systems to achieve continual biodiversity enhancement and protection on its landholdings.
I have been commissioned to complete a suite of wintering and breeding bird surveys at the site to provide a baseline for what the site currently holds in terms of bird populations during winter and summer. I have been doing the wintering bird surveys since October, and they will continue until March, and then I'll complete two breeding bird surveys during the period between April and June.
The day before the solstice, Gail and I visited the site to complete a survey under full cloud cover, with a light easterly wind. There are a number of habitats to be found on the farm, including ponds, ditches, hedgerows, arable land, permanent grassland and broadleaved woodland. The farm isn't too far from the Ribble Estuary, and as such skeins of Pink-footed Geese flying over from roost sites on or close to the Ribble to feeding areas on the Fylde is a common sight, and this morning was no exception, with 257 'wink-winking' birds flying over. 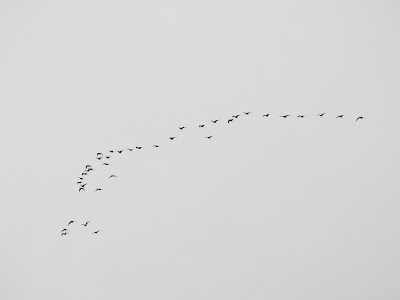 Pinkies
Still on the subject of wildfowl, three Teal on a woodland pond was notable in that it was a first record for the winter surveys. I suspect over the coming months there will be more Teal on the more open ponds. Just two species of raptor on our walk round, a 'mewing' Buzzard and a male Kestrel.
There were other firsts for the winter as well, including two Ravens, a Goldcrest, a Nuthatch, 20 Tree Sparrows and a Yellowhammer. All species that regularly occur at the site I don't doubt, but it is good to record them and add them to the database. One of the main habitats on site are the network of fruit laden and mature hedgerows that support good numbers of wintering thrushes, and on this morning, we recorded eight Song Thrushes, 69 Redwings, 16 Blackbirds and 25 Fieldfares. Not bad.
Those were the highlights, and it was all good stuff.
Let's head back to the Galwaithegate. I blogged about the Old Scotch Road in 2019, and if you wish you can read this post again HERE. When I was researching the history of the Galwaithegate back in 2019, I found an article about it in the Westmorland Gazette from 2015 by a local historian called Alan Wills, and I have posted it in full below, and I hope you find it as interesting as I do.
How many walkers, enjoying the scenery as they stroll down the lane past Killington Reservoir, know that they are following in the footsteps of thousands of drovers and their herds of cattle?

The ancient route from Low Borrow Bridge to Old Town, Mansergh, was known as the Galwaithegate (the Galloway Road) and was referred to by that name in the 12th century when Roger Fitz-Ranfray gave some land to William de Arundel.

Most of the cattle were from Galloway or further north in Scotland, even the Highlands, although some had come from Ireland. They were usually black like the modern Galloway breed.

Although they would be passed from one set of drovers to another if they were sold at one of the cattle fairs such as those at Falkirk or Carlisle, a lot of them had the same drovers for the full journey to the south of England.

The Highlander in his plaid would have been a common sight on the Galwaithegate.

The various routes south from Orton converged at Low Borrow Bridge, where there was an overnight stopping place. Other overnight stopping places were at Lambrigg Park, Three Mile House and Old Town.
The drovers could stay in the inns at those places although the Highlanders often preferred to sleep under the stars with their charges. They were also noted for their frugal diet of oatmeal and onions.

From Low Borrow Bridge some cattle went down the Roman road towards Sedbergh but most went along the Galwaithegate, which crossed and then re-crossed what is now the A685 Tebay to Kendal road at Grayrigg Common.

The route can then be followed along the wide lane which is known as the Old Scotch Road to Lambrigg Park, apart from where it has been interrupted by the M6.

Here it was joined by many cattle, which had walked from the west coast via Wrynose Pass, Ambleside, Troutbeck, Kentmere and Longsleddale. It then continues south to Old Town, which had its own cattle market every October.

The opening of the Lancaster to Carlisle railway in 1846 ensured that by 1855 cattle droving on the Galwaithegate had all but ceased.
On the Solstice, my plan was to do a bit of seasonal shopping to get some presents for Gail, and my first port of call were the bookshops in Sedbergh. As I came off the M6 to head to Sedbergh on the A684, I decided to stop on the Old Scotch Road and have a walk along it to stretch my legs.
The noise of the M6 is always in the background, but in places it is invisible, and when your mind starts to wander, you can picture those drovers from the highlands, walking their cattle to market along this ancient highway. 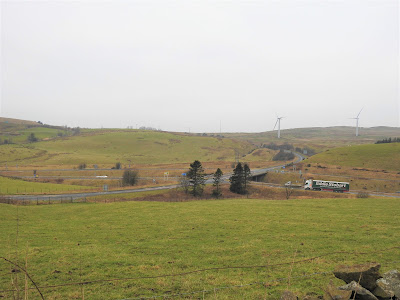 Looking towards the M6 from the Galwaithegate
It was a bit of a dreich morning, so I knew it would be quiet, and the views of the Howgills were indistinct because of the murky conditions. There were a number of Fieldfares and Redwings, 31 and 45 respectively, feeding in some of the sheep-grazed pastures, taking advantage of the short sward to access invertebrates. A group of thirty Starlings and two Mistle Thrushes were doing the same.
With the relative reduction in persecution from game keepers these days (I say relative, because there is still a great deal of raptor persecution in the uplands), Ravens are very much a part of the lowland avifauna, but to me they still epitomize the uplands, so it was a pleasure as always, to have two croaking individuals flying past me over the Galwaithegate. A Buzzard, and a three quarters of an hour walk later, and it was time to return to my quest to purchase a present or three for Gail! 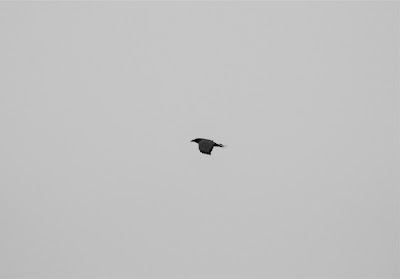 A dodgly shot of one of the Ravens