Over New Year, Gail and I spent time with our good friends Robert and Diana putting up and building nest boxes for Tawny Owls, Pied Flycatchers and Tree Sparrows, but more of that later.
I need to rewind to just before the winter festivities, when I carried out the second of the December wintering bird surveys at this particular site in northwest Lancashire. I spent five hours surveying, including time at two different vantage points, under full cloud cover, with a moderate south-westerly wind.
As I've mentioned before, Pink-footed Geese and Whooper Swans are the focus of these surveys, and once again I recorded both species on this morning, but they were all fly-overs; 886 Pinkies and three Whoopers.
Talking of wildfowl, I decided to have a walk down towards the fishing lake and see if I could see onto it properly, rather than having a look at it from afar from my first VP. And it was worth the walk, as I could see over quite a large part of it, and my counts were a good deal healthier. On the lake were 13 Wigeon, 297 Mallards, 27 Teal, a pair of Pochards, five Tufted Ducks and 94 Coots (I know they aren't wildfowl!).
During this survey, I recorded two new species for the site, the first one being the pair of Pochards on the fishing lake, and the second being a Barn Owl that gave a brief view at first light as it disappeared behind some trees, heading towards some old farm buildings.
Raptors were thin on the ground, with just a single Buzzard and two Kestrels. However, I did record numbers of Corvid species, with 23 Magpies and 246 Jackdaws being the highest counts. There were still at least 30 Skylarks feeding on the stubble fields, and wintering thrushes numbered six Song Thrushes, a Mistle Thrush, seven Redwings, six Blackbirds and 40 Fieldfares. A Tree Sparrow, twelve Linnets and two Reed Buntings were best of the rest.
As I mentioned at the beginning of this post, I spent a couple of days putting up Tawny Owl boxes and building Tree Sparrow and Pied Flycatcher boxes with Robert on his farm near Nateby. The same farm where we operate our feeding station. So, over the New Year period I topped the feeders up at the feeding station, 15 Tree Sparrows being the highlight, and had a quick look on the wetland, that held 160 Teal, three Shovelers and four Wigeon.
Robert had three Tawny Owl boxes to put up, and we managed to find suitable places for them all in his 6 acre woodland. As we were wandering around looking for suitable trees to put them on, we put a Woodcock up. 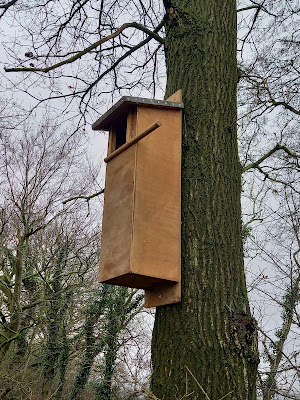 One of the Tawny Owl boxes
We put the Tawny Owl boxes up in the morning, and after lunch we started to build 24 boxes for Pied Flycatchers and Tree Sparrows. Robert had kindly already cut the wood up, so it was a case of assembling the boxes. The following day Gail joined us for the morning, and helped to give them all a coating of wood preserver. The next job now is to get them put up in readiness for the forthcoming breeding season. 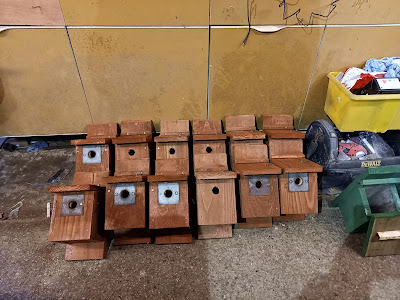 Pied Flycatcher and Tree Sparrow boxes (above & below) 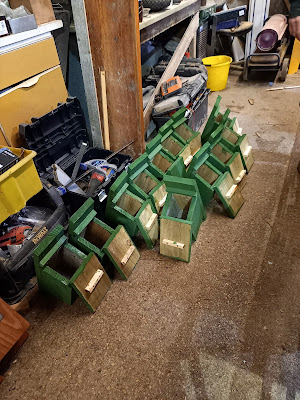