North shore
Pale-bellied Brent 49
They were well scrutinised today by Tim Woodward and Kevin Singleton.
In the late morning Tim went to check what yesterday evening's birds could have been eating:

I went to where we estimated that they were last night. There are some fairly substantial clumps of weed around but it’s not widespread

At that point there were 40 Brent out from the play area. Later in the afternoon when Kevin checked, they had grown to 49. These are some of his pictures: 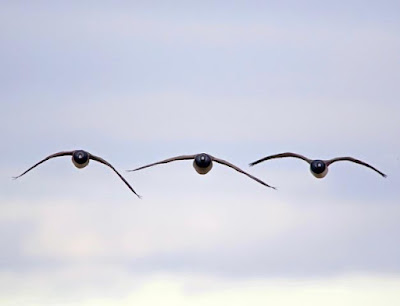 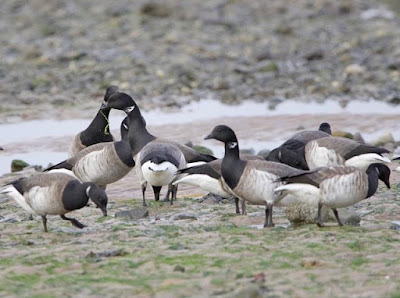 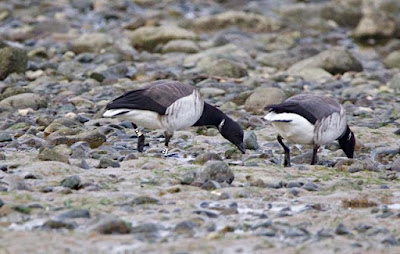 Tim returned in the evening to check their movements at dusk, unfortunately somewhat thwarted by some "late" dog activity.

45+ were down by the playground until just after 16.10 when flushed by a dog. All previous times I’ve seen them put to flight they’ve landed pretty close by, but this time they flew 600m and landed on the water in the armpit of the Skear. 20 minutes later there were only three still in the water, the rest were a few metres away on land. At 16.40 they took to the air and initially headed towards Morecambe, but switched direction and landed in the water maybe 50-100m from shore. No dogs seen to be involved. 16.50-16.55 they were just visible through binoculars- some in the water at the end of the spike of the Skear and some on the Skear itself. At this point I ran out of light!

Middleton Nature Reserve (MD)
When I checked the east side on Tuesday I couldn't locate any winter thrushes, so today I checked the west side too. The only thrushes seen were Blackbirds and probably no more than typical resident numbers. The Hawthorn berries are pretty much stripped from the trees, but there is still some to be found if we get any cold weather displacement.
Mute Swan 7 adult 9 juvenile
Moorhen 11
Coot 2 - a new(?) bird on Tim Butler pond - this is it leading the lone Mute. It looks like the tug towing the Fighting Temeraire up the Themes.
Gadwall 40
Tufted Duck 6 male
Shoveler 2 (pair)
No Wigeon or Little grebe seen
Water Rail 2 heard
There are still lots of Elder cones in the trees, but perhaps they are now empty, or perhaps rising buds just taste better, either way, that is what the Goldfinch are now eating (this clip is actually from earlier in the week, but they were still at it today)
Just out of the recording area:
Mediterranean gull 1 adult on top of usual traffic light lamppost. 10:00, I was just going to take a picture when it flew and joined Black-Headed gulls feeding in a bungalow back garden. I think they are fed here regularly, so perhaps just before 10:00 may be a good time, if the feeding is punctual. As ever be mindful of privacy, but on the lamppost it is fair game.