I put together a few notables around the estuary on Friday, starting at Conder Pool where there was a decent count of 35 Tufted Duck, the 47 Wigeon present took off in sync flying to the estuary. Also 4 Little Grebe, and 2 Lesser Black-backed Gull noted on the island.

At Cockersand, the swans were over three fields again, the ones north of Bank End Farm were distant and inaccessible, but I reckon the total count was of up to 320 Whooper Swan with 12 Bewick's Swan including juveniles, and 2 Black Swan in the field west of Gardner's Farm.

View Full Screen
Around 90 Pink-footed Geese were in a field - a few in the next field - between Lighthouse Cottage and Abbey Farm, and at least 500 Curlew were in view on the Cocker Estuary, probably more out of my view at Bank End. 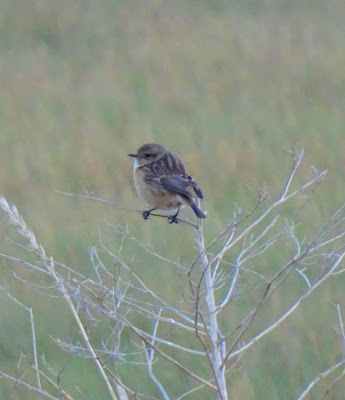 Stonechat Female Cockersand 14 Jan. Pete Woodruff.
It took a while to find the female Stonechat being elusive today, but it eventually performed well in front of the motor, from where I got the shot through the windscreen. I've not seen the male of this pair on my last two visits here, and four other reports failed to mention the bird. 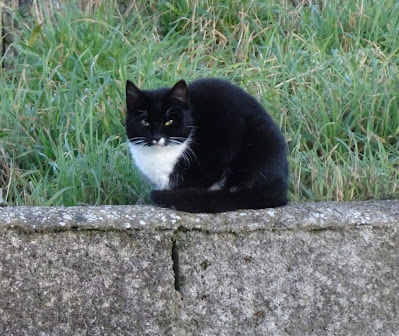 NOT ME!
I'm now thinking it may have fallen prey to a cat, there are at least three often around and on the hunt, though I did catch a glimpse of what I reckon was a male Stonechat in silhouette at the far end of the rough field behind Lower Bank Houses....Watch this space!
The light was fading when I decided to take a brief look at the estuary at Glasson, but I managed to find an adult Mediterranean Gull with at least mainly 400 Common Gull....probably an underestimate there.
Black-necked Grebe....Ian Hartley LDBWS.
A blast from the past December 2019, and a good example of why the Lune Estuary is amongst those at the top of the list for some excellent all round birding in our area.
View Full Screen Video Pete Woodruff
The header Grey Wagtail visiting his garden, features one of Martin Jump's excellent images he keeps sending me....Thanks Martin.
Breaking News.
Male and female Stonechat at Cockersand yesterday 15 January, in grassy area off the Caravan Park.....Guy McClelland LDBWS.