On a beautiful sunny if cold day on Thursday, the purpose of a trawl around Marshaw - Tower Lodge - Trough Bridge, was to give me some mental and physical well-being, this clip certainly contributed to that....but not a bag full of birds. In fact in the 4 hours I was there, a count totaled a pretty depressing 9 species....yes NINE!

OK, so this is upland birding in January, but c'mon, 9 species being a classic example of recording what you don't see, being as important as those you do.

My list was, 4 Mallard, with not a Dipper in sight on the Marshaw Wyre, 2 Red Grouse, 8 Long-tailed Tit, 2 Dunnock, 6 Blackbird, a Robin, Kestrel, and a Pheasant. Well if that's not depressing....I give in!

But with a couple of hours decent daylight left, I gave Hawthornthwaite a look in, brief by usual standards. The brilliant sunlight on the fell did me a favour, when I spotted a pair of Stonechat on the top of a ridge, I found a pair here on my last visit on 11 November. Also seen, 6 Red Grouse, a Buzzard, and a Snipe, on take-off with it's 'muffled sneeze' soon dropped to ground again. 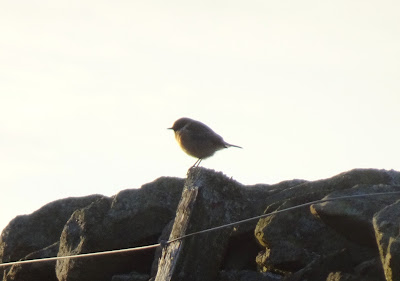 When I came back down, a male Stonechat was silhouetted against the light on the wall opposite and soon disappeared. But the day that had offered me few birds, soon turned positive when a Barn Owl came on the scene to give me several minutes of pleasure when it hunted the lower moor of Hawthornthwaite, before making a dive opposite me on the other side of the road.

View Full Screen
Barn Owl.
The Barn Owl is recorded as a scarce resident breeder in our area, with no breeding reports in The Birds of Lancaster & District 2019
Ten pairs of Barn Owls nested successfully in monitored boxes in Bowland in 2020. The East Lanc's Ornithological Club received 136 records, with confirmed breeding at 17 sites. Sightings from 8 locations in the LDBWS recording area were published...Lancashire Bird Report 2020
I don't recall ever seeing a Barn Owl in Bowland, so an excellent first for me. I've obviously been going to all the wrong places in Bowland all these years, but Thursdays bird put an end to that, and gave me another Grand Finale.
The header image of the PFG at Cockersand, in the same field I saw them in on 14 January, is to show my appreciation to Ian Mitchell for sending it to me.