January was a very quiet month for ringing, and I only managed to complete two sessions at the feeding station. As I've mentioned before, the feeding station is located on a good friend's farm near Garstang, and is situated on the edge of some woodland. In addition to the feeding station, and associated area of ancient semi-natural woodland, there is a wetland that can hold good numbers of waders and wildfowl.
Before I get into what we did, or maybe that should be didn't catch, it's worth mentioning some of the birds that I recorded on the wetland and surrounding area. On the wetland there was a staggering 424 Lapwings, 180 Teal, 34 Mallards, 19 Shovelers, a Little Egret and 21 Wigeon.
I never seem to have time to stand and observe birds coming to the feeders because I'm usually busy extracting birds, so it's the old ears that come into play to record anything slightly out of the ordinary, and I heard both Brambling and Siskin in the vicinity of the feeders. There was probably in the region of a dozen Tree Sparrows coming into feed, but that's probably a gross under-estimate.
Feeding in some of the sheep grazed pastures were 40 Fieldfares and 25 Redwings, and a couple of Ravens knocking about is worth mentioning.
Below I've combined the totals for the two ringing sessions to make it easier (recaptures in brackets):
Chaffinch -10
Blue Tit - 5 (10)
Great Tit - 14 (3)
Tree Sparrow - 2
Robin - 2 (1)
Coal Tit - 1
Greenfinch - 1
Dunnock - 1
Blackbird - 1
Great Spotted Woodpecker - (1)
Blackbird - 1 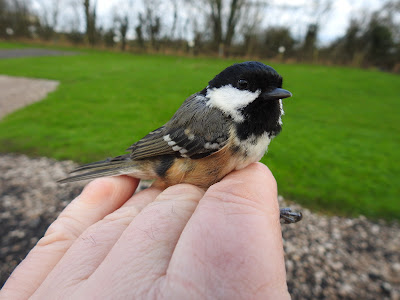 Coal Tit
I purchased a new bit of kit this past week, a HIK Micro Owl thermal imaging scope, that I intend to use for monitoring productivity of breeding waders, as well as for ringing some target wader species at night. The thermal imaging scope/camera enables you to find birds based on their heat signature. I'm looking forward to using it in 'anger'. I'll let you know how I get on. 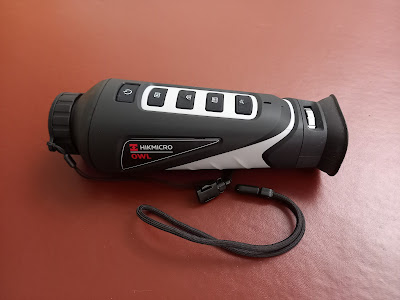