I've mentioned before that at this time of the year wintering thrushes spend most of their time foraging for invertebrates. There are two reasons for this; firstly, by late winter there are very few berries left on the hedgerows, and secondly, fruit alone can't provide all the protein and vitamins that the birds require.
I came across some of these invertebrate foraging thrushes, when I was out on one of the mosslands in southwest Lancs a few weeks ago, carrying out a wintering bird survey, in the form of 94 Fieldfares and 115 Redwings. Mistle Thrushes were very active too, and on my transect I recorded three different birds singing. 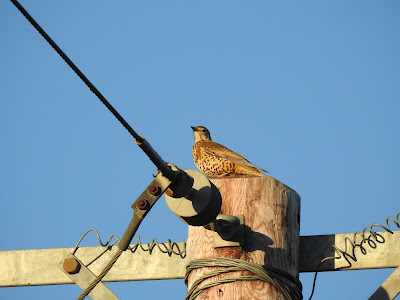 Mistle Thrush
One of the most numerous red-listed finches that I encounter during wintering bird surveys is the Linnet, and this might be because of the habitat that I am surveying in. On this survey I had 108, with some of them perched up on some telegraph lines over a stubble field. Another red-listed farmland bird that I recorded on this visit was a new record for me, for the site, and this was a group of three Yellowhammers that flew over me calling. Yellowhammers are one of those species, along with species such as Goldcrest, Corn Bunting, Tree Pipit, Grey Wagtail and Redwing etc, that birders of a certain age can no longer hear. I am a birder of a certain age, but thankfully I can still hear them all clearly! And long may it remain so. 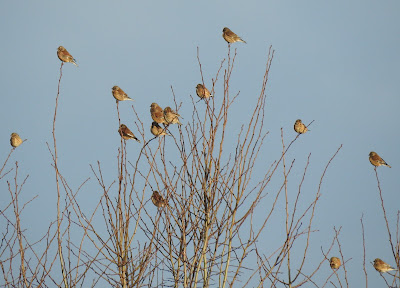 Linnets
I mentioned in a previous blog post about how numerous Stock Doves now seemed to be, and I had just eight during this survey, but I did have 92 Woodpigeons, which is more than I have had of late. Raptors were thin on the ground, with just a single Buzzard and a male Sparrowhawk. 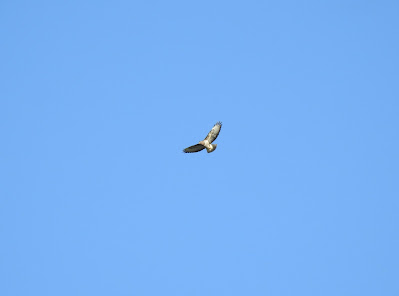 Buzzard
A few days after encountering these invertebrate feeding thrushes, Gail and I had a walk along the quay close to home, looking over the mudflats and saltmarsh. The area of mud within the quay is the last to be covered on the estuary when the tide is running in, and is also the first to be uncovered when the tide is running out. So, if you time it right, there can be a number of Redshanks and Black-tailed Godwits here. 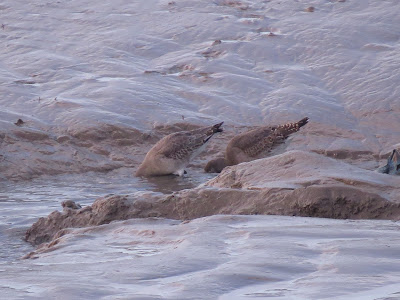 Black-tailed Godwits - wot no head!
We did time it right, purely by chance, and spent some time watching 104 Black-tailed Godwits and 59 Redshanks feeding on the mud before the tide covered it. I love watching the Godwits feed, as sometimes they push the entirety of their long bill and head right into the mud, in pursuit of a juicy marine invertebrate!
A female Peregrine was sat in her usual roosting spot during a high tide, and as it was a cold day, we had a chippy lunch in the cafe overlooking the mouth of the estuary. Chips always taste better when you're cold and hungry!
I read in a recent British Birds (BB), that a team of European researchers has calculated how many breeding birds have been lost from the continent since 1980. Their analysis suggests a net population loss of around 600 million birds, with House Sparrow suffering a loss of at least 50%, the equivalent of 250 million birds. Think about that, 250 million less House Sparrows in just 40 years, that's staggering! Cousin of the House Sparrow, the Tree Sparrow, lost 30 million birds! Another frightening loss.
There were huge decreases in other formerly abundant species including 97 million fewer Yellow Wagtails, 75 million fewer Starlings and 68 million fewer Skylarks.
Interestingly, the authors of the report calculated that a staggering 900 million birds have been lost during the period, but this has been offset by an increase of c. 340 million individuals of a few expanding species.
When populations were compared by habitat, the highest total losses were seen amongst farmland and grassland birds, which isn't surprising. Long-distance migrants such as Willow Warbler and Yellow Wagtail have declined proportionally more than other groups, and in my own county, Yellow Wagtails are now virtually extinct as a breeding species.
There was some good news however, in that the rate of decline has slowed in the last decade, and the authors think that the EU Birds and Habitat Directives may be having an effect. Also, seven species of raptor have increased in recent decades with greater legal protection and the reductions in organochlorine pesticide use.
The emphasis for everybody, not just the conservation organisations, should be to try and prevent extinctions and recover species abundance.