I did a suite of surveys running up to the end of January, and didn't record any Woodpigeons! Off the top of my head, this must be a first, as I would say that Woodpigeon is one of, if not the, commonest species that I record. I suppose this is the beauty of these surveys, where you are recording every species that you see and hear, and not just cherry picking the interesting stuff for your notebook!
I was stood at one of my VP locations that is close to a small copse, and that 'piebald forester', aka a Great Spotted Woodpecker, was drumming away. I can add 'Great Spot' to the growing list of birds that are singing now as we slowly approach spring. Looking out of my window as I type, it's hard to believe that the first Wheatear will be at the Obs in less than three weeks!
At one of my other sites, where my first VP overlooks a fishing lake, I added a new species to the list of species that I have recorded at this site during the wintering bird surveys. I have completed twelve surveys so far at this site, and this morning was the first morning that I recorded Gadwall, and two males and females were on the fishing lake.
Pink-footed Geese have been a constant at this site, in fact the reason for the surveys in the first place, but they have all been fly-overs, just like this morning, when 515 went over. I mentioned in a recent post about the help I received from a Buzzard in counting the Wigeon and Teal on various ponds, and it was the same again, although I don't know what had spooked them, but I counted 81 and 29 flying round respectively.
I had a record winter count for Lapwing for the site, when I recorded 340 in total, and an adult Med. Gull amongst the 'Black-heads' was a new species for me, for the site. Jackdaws and Rooks numbered 117 and 66 each, and 78 Skylarks still foraged in the stubbles. 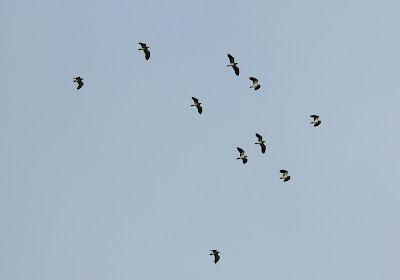 Lapwings
As I mentioned in my previous post, wintering thrushes were foraging for invertebrates here as well, and I encountered 26 Redwings and 77 Fieldfares feeding with Starlings in the wet winter wheat fields. A count of 26 Pied Wagtails was another record count for the site, but I could only find 19 Linnets.
A couple of days later I was in southwest Lancs under complete cloud cover, with a light south-westerly wind. One of the first signs of spring for me is the return passage of Common Gulls, and once you get into late January these superb Gulls start appearing in numbers, and on this morning alongside 60 Black-headed Gulls I counted 37 of them. 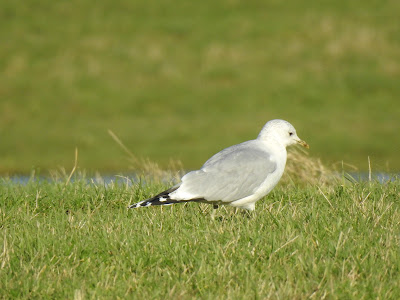 Common Gull
No Fieldfares this morning, but a singing Mistle Thrush and 54 Redwings had to do, and Stock Doves only numbered four. Raptors were only represented by a Kestrel and a female Sparrowhawk. Those were the highlights leading up to the end of January, and I must admit that I am looking forward to spring now. 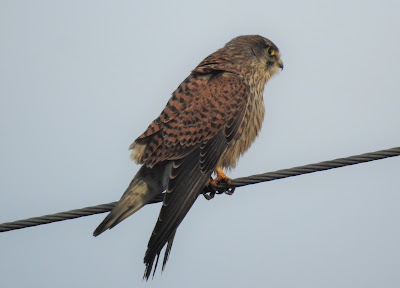