When I'm doing my surveys, whether it's a breeding bird or wintering bird survey, I like to carry a camera with me just in case. It might be to 'snap' something that presents itself to me as a photographic opportunity, or perhaps to capture the landscape in a certain light. I'm no photographer, just an opportunist 'snapper'.
Lately though, I do find myself capturing more and more images with pen and paper, if that makes sense. I'm no Jim Crumley, Seton Gordon or Robert Macfarlane, but I think I'm better at painting with my pen, than I am with a camera, or dare I say it with paper and paint!
When I wrote the above words in my notebook, I was at one of my wintering bird survey sites in northwest Lancs sitting on, or is that in, a field margin with my back against a sheep netting fence, with that dreaded strand of barbed wire across the top, ready to snag some unsuspecting, or less cautious, creature.
About half an hour earlier, I was stood at my first VP over-looking a fairy intensively farmed landscape; bright green 'improved' pasture, or bright green winter wheat, for as far as I could see. This particular VP is next to a small pond, that I put nine Teal up from as I walked towards it. Nine 'high pitched, clear ringing whistles' sprang into the air, and circled round before dropping on to another pond. This pond is fairly grotty looking, it was discoloured, and from a water quality perspective I suspect that it will have been full of nitrogen and phosphate. No lovely tussocky field margin here affording it some protection!
I digress. As I was stood sentinel at my VP, I picked up a large-ish raptor flying from left to right, and getting ever closer to me. I lifted my bins, and it was a Peregrine, and a female at that. As she got closer, I had to strain my neck more and more from the horizontal to the perpendicular, and she flew straight over my head.
As she flew over me, I could see her turn her head to look at me, and we exchanged glances. Our eyes met, granted I was looking through some optics, but I was fully aware of her, and her of me. For those few seconds we looked at each other, and we shared everything. The same space and time, the weather, the feel of the wind on our faces, but most importantly, we shared a moment where we were both aware of the other's presence. It doesn't get better than that. Encounters like this, though often fleeting, are very special to me. It is an immense pleasure, an honour even, to share a moment like that with such an amazing bird as a Peregrine. You don't forget moments like that.
Funnily enough, as I sat getting cold after making some notes on my Peregrine encounter, and my muscles started to ache after sitting on the floor, a Robin came to investigate me, as they often do. It's easy to anthropomorphise what the Robin was doing, or what it thought of the large, khaki lump sat on the floor. I suspect it thought that I was some sort of animal rooting amongst the vegetation for food, and that I might turn over the soil to reveal a juicy morsel that it could feed on. Nevertheless, still just as lovely an encounter, whatever the reason for it. 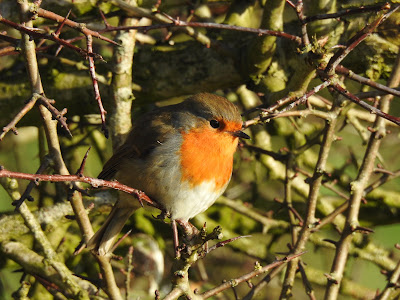