Before I get on to the subject of upland scrapes, I just wanted to comment on my header picture that you might have noticed of a stylised Blue Tit in Ukrainian colours. This is the work of a brilliant bird artist in Orkney called Tim Wootton, and if you click HERE, it will take you to Tim's Facebook page, where you can view his superb paintings, and if any take your fancy, there's also the opportunity to purchase them if available. Tim came up with this Ukrainian Blue Tit artwork, for anybody to use in any way at all, to show support and solidarity for the people of Ukraine.
Moving on from my close encounters last time, in addition to sharing a moment with the mighty Peregrine and the not so humble Robin, I did record a few other bits and pieces. Like at another of my recent survey sites, something unknown to me had put the Wigeon up, and I had a flock of 120 flying round, before heading southwest, presumably towards some grazing marsh on the Ribble. Ten Teal and twelve Shelducks were also flying the wildfowl flag.
I have talked about Stock Doves recently, and on this afternoon, I had a flock of 59 drop in and feed on one of the winter wheat fields. In fact, they outnumbered the Woodpigeons by nearly 4:1!
A few Lapwings were on the move, perhaps spooked by whatever spooked the Wigeon, and I had a flock of 145 go over. Looking over my notebook, there isn't really any else worth mentioning other than a couple of Kestrels, a Jay, 32 Rooks and two Mistle Thrushes perhaps.
I have talked about one of my clients before, who has an upland farm in Bowland, and some of the great conservation work that he carries out. One of the things that he has done this winter is to put some more scrapes in, and you will see from the picture below what the scale of them are. I can't wait for the birds to return now. I will be using my recently purchased thermal imaging scope to monitor productivity of the breeding waders, by hopefully being able to find all the nests and chicks. 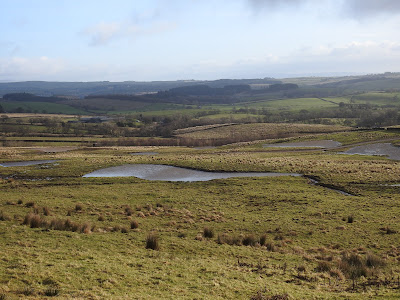 In early Feb I visited the farm to see how the scrapes were looking, and whether they had bedded in a bit more, and they have. I also wanted to have a look at the wader fields to see how the grazing over-winter had faired, and whether it was looking good for the spring, and I am pleased to report that it was looking very good. We just need the birds now.
It was a very blustery day, NW 5, so I didn't see much on my walk round, which was okay, as I had my head to the ground a lot anyway, assessing the sward height in various locations. As usual, I had a croaking Raven fly over, and 30 Fieldfares were feeding away in one of the pastures. I did have a Snipe on the new scrapes, so that was good.
Just looking at a notebook from 2013, I can see that on 1st February 2013 I had a female Smew at the Nature Park, that my good friend Ian found. All my notebook says is "Smew - female - 1530/1550". I wish I had said a bit more about the sighting, as the old grey matter isn't as good at recalling these events as it used to be! It was certainly a good bird, and I'm pretty sure that was the last Smew that I saw. I certainly can't recall seeing any since then anyway. So, another would be good!