You've probably guessed that I am busy playing catch up with the Blog. The weather in February was particularly poor, and in terms of my Blog it was feast or famine. When the weather was poor, I was stuck inside with nothing to report, and when it was good, I was busy outside doing survey, after survey, with no time to write about it! Such is life!
We've also got to that time of year again, when wintering birds are slowly heading back to breeding grounds, pairing up, starting to sing etc., in short, preparing for spring, and it's too early for any migrants. A similar thing happens in late summer, when there is that gap between the ending of the frenzied breeding season, and the arrival of autumn migrants. It's almost like a pre-equinox flatline!
As I mentioned at the start of my blog, I am playing catch-up, so here I am returning to early-mid February, and starting off with two sites in northwest Lancs; one closer to the Wyre estuary, and the other closer to the Ribble estuary. Starting with the former site, I noticed an increase in Buzzards in comparison with the rest of the winter, when I had four birds that were very active and interacting with each other, obviously a bit of spring behaviour. Other raptors consisted of a single female Sparrowhawk, and a single Kestrel. 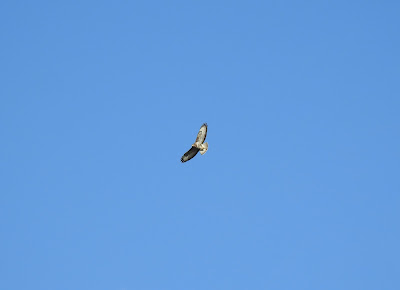 Buzzard
Forming part of the southern boundary of this site is an area of woodland, that is host to a fairly larger Rookery, and the Rookery is starting to get quite active. I suppose Rookeries remain active for most of the year, as during the winter Rooks and Jackdaws will roost at Rookeries, and some quite impressive pre and post roost flights can be observed. However, the activity was all down to the Rooks today, as 103 of them were noisily busy around their nest sites, and I don't doubt there would have been a few repairs being done to old nests in readiness for the forthcoming breeding season. As you know, Rooks nest early, and young can be in the nest from late March onwards, so with a 15-day incubation period, and 3 - 4 eggs laid, by early March the nests need to be in good shape.
I also recorded the Rooks larger cousin, when I had two Ravens messing around in a field not too far from the Rookery. I have had a few Ravens at this site on and off all winter, and as I have said many times before, I never tire of seeing Ravens. A flock of 32 Redwings was notable, and a flock of 76 Linnets were still feeding in the stubbles.
As I touched on before, most of my birding of late, in fact nearly all of it, has been done when I have been out completing bird surveys for my day job. Just thinking about this for a moment, there aren't that many bird surveyors/Ecologists that are also keen amateur naturalists, which I think is quite sad really. Ecology is often seen nowadays by many young people purely as a career. Nothing wrong in that you might say, and to a certain extent I agree, but by a lot of people it is viewed as a career alongside banking, the civil service, accountancy etc., or any other career you can think of. This doesn't mean that you can't be a good Ecologist if you're not an amateur naturalist as well, but I sometimes think that if you're not, then some of the passion is missing. However, I must point out that I do know several young people who are both cracking Ecologists and passionate amateur Naturalists!
Where am I going with this? What I am trying to say is, that because most of my excursions into the field of late have been all work related, then there is more pressure, and not enough time to 'stop and stare'. And even less time to put pen to paper.
I'll give you an example. A Skylark singing above a field of winter wheat this morning was reduced to an S., with a circle round it, to denote 'singing Skylark'. What I wanted to do was stop and stare, and above all else as it's a Skylark, listen! Marvel at that 38-gram beauty climbing into the sky, so high that you can hardly see it, and pouring its heart out, as the notes fall to the ground as if in some liquid form, and I half-expected to feel the notes on my face. 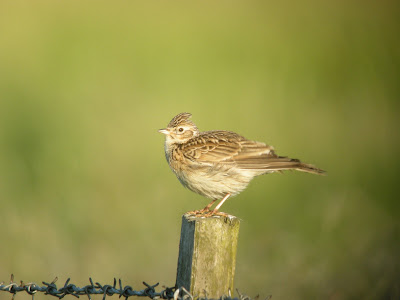 Skylark
There's a guy that I have got to know at this site, and on most mornings that I am there, he is walking his two gun dogs. We always stop for a chat, and talk about what we have both seen lately. I was stood at my first VP on this particular morning, and a Skylark was singing away, and as he walked up to me, he said "listen to that, absolutely beautiful", and he's right. He then went on to tell me that he had made a request that at his funeral, hopefully long in the future, he is going to have Skylark song playing as mourners enter the chapel, and I thought that was lovely.
The following day I was at the latter of my sites, the one closest to the Ribble estuary. I saw fourteen Brown Hares that morning and 49 Shelducks. This particular site is good for Brown Hares, and as they have been pre-occupied with romance, they have come very close to me when the males have been chasing the females. Watching the female 'boxing' away the male's attention at close quarters has been magical. In fact, they have been within ten metres of me, so close that I haven't been able to reach for my camera. But I can reach for my pen after the moment, and capture the image in writing! 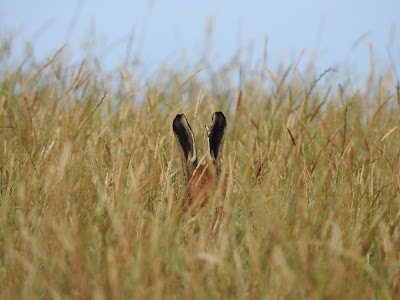 Never mind the legs, look at those ears!
I love the way Brown Hares move, especially when they move slowly, when they have that loping gait, almost as if their legs and feet are too big for them, or that they will carry them off at great speed at any moment. Irish birder Anthony McGeehan in his excellent book Birds Through Irish Eyes, described Red Kites as "...big, lanky basketball players. Gangly at rest, with long limbs and a loping gait...", a description that fits equally well with Brown Hares.
At this time of year, Shelducks are moving from the coast to inland breeding sites, and on floods they often gather in numbers before dispersing. And my count of 49 of these large black, white and reddish-brown birds was notable for the site. Their markings are simple; dark green (looks black at a distance) and white, with a reddish-brown strip at the breast, contrasting with a dark red bill and legs. Stupendous! I still think less is more when it comes to plumage details on some of our most beautiful birds. Think Avocet, Magpie, Pied Wagtail or Gannet even. Just a few contrasting colours that look fantastic.
The northeast reference in my title refers to a site that I have been asked to complete wintering bird surveys at near Middlesbrough. I'll complete two in February and March, and the rest of the surveys will be completed in October to January next winter. The site is an area of rough grassland with Birch Scrub, in the middle of an industrial complex.
It was a clear frosty morning when I completed the first survey, and it was a pleasure just to be wearing boots, rather than wellies, as the ground was frozen hard, and also because it is a dry, sandy site. I didn't really have anything noteworthy during this first visit, just lots of fly-over Gulls, and at species level twelve Stock Doves and a female Sparrowhawk.
There's more to come in the next few days.