There are two large Starling roosts relatively close to me; one at Leighton Moss RSPB, and the other under north pier at Blackpool. As the Starling flies, the closest is the one at Blackpool, and it was at one of my wintering bird survey sites that Starlings were gathering on pylons, and then heading west towards this roost. 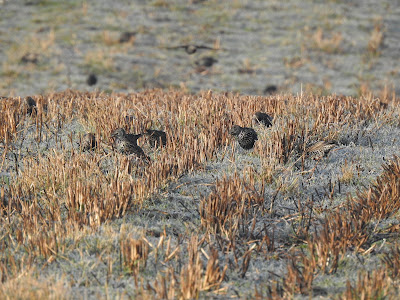 These Starlings feeding in some stubbles at one of my wintering bird survey
sites, will almost certainly be roosting under the pier!
I was doing an afternoon survey up until dusk, rather than the more usual from dawn, and as the day lengthened, and the sun lowered in the sky, Starlings started arriving from the east, and heading to the west. Some stopped off on electricity pylons and wires, while others just poured overhead. I counted 11,132, but this was certainly an under-estimate. It was definitely a spectacle though!
The survey had been quiet, although three singing Song Thrushes was noteworthy, and perhaps I should make mention of the Kestrel that was knocking about. 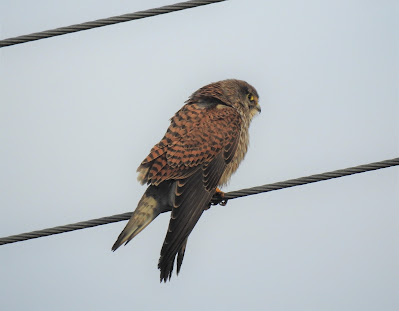 Kestrel
My next survey a week later in southwest Lancs, was another afternoon to dusk survey, and as these afternoon surveys often are, it was quiet. Another thrush species featured, with two singing Mistle Thrushes and a further four feeding in some stubbles. Also in the same stubbles were 25 Skylarks, 28 Linnets and 67 Redwings.
A flock of seven Yellowhammers was a good record for the site, and 197 Jackdaws heading to roost at dusk was perhaps more expected.
The following day I was back out at first light on a farm near Wrea Green, that's doing lots of great conservation work, and I've mentioned this before, but they've employed me to do a suite of wintering bird surveys, followed by breeding bird surveys, so they know what they've got, and perhaps what they can do to improve the farm for farmland bird populations.
It was thrushes again that were the feature and I had a good count of 241 Redwings, plus two Song Thrushes and eight Blackbirds. I'd had the odd sighting of Yellowhammer over the winter, so it was good to hear a male singing away from a hedgerow on the farm. It would seem that they are just about hanging on as a breeding species in this area.
A few days later I had another trip over to the northeast, and on a cold frosty morning I had a few more birds than I did last time at this wintering bird survey site near Middlesbrough. I won't beat about the bush, or try and drag it out, I just had a Stock Dove, six Curlews, 13 Carrion Crows, 22 Herring Gulls over, four Skylarks, nine Long-tailed Tits, 58 Fieldfares and three Siskins. Nothing amazing, but an improvement on last time. 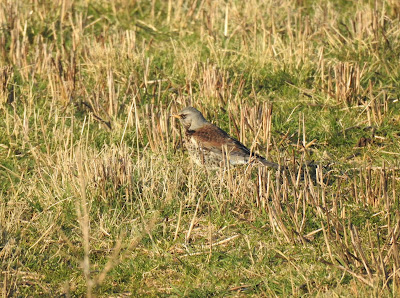 Fieldfare
An update on nest boxes next.