There goes that old chorus again, the one that ringers use when numbers are low but there are a few goodies to shout about.
Until today the week was a little breezy for the Pilling site where even a breath of wind that blew through the bare hawthorns wafted a mist net around and made it visible. This morning was slightly better with zero wind and by now, after a couple of sunny days, green leaves and blossom in place of bare branches.
Although by the end of March there are migrant birds to see the main bulk of migration of insect eating passerines is still three, four and more weeks away. I hoped to catch a few Meadow Pipits, a species that migrates north in good numbers in March but there seemed to be few around and I thought maybe they were high up in the cloudless sky with no reason to landfall.
In fact visible migration was rather poor with small numbers of Lesser Redpolls and Reed Buntings being the most numerous. Just 9 birds caught – 5 Reed Bunting, 1 Goldcrest, 1 Blue Tit, 1 Lesser Redpoll and 1 Brambling.
The Brambling, the second one caught here this spring, was a subtle looking second year female without the black and bright orange shades of the male caught here a few weeks ago. 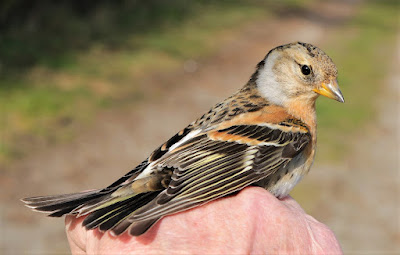 Brambling
The redpoll likewise proved to be a second year female. A second Lesser Redpoll escaped the net before I could reach it when I was forced to deal with a Mallard crashing about in another mist net. The nets are not designed to cope with wayward Mallards. Fortunately the duck found a way out with damaging the fairly new £90 net. 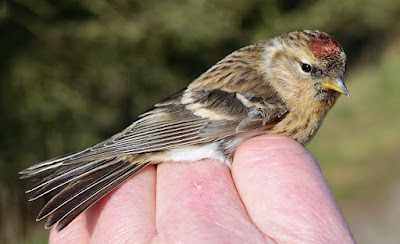 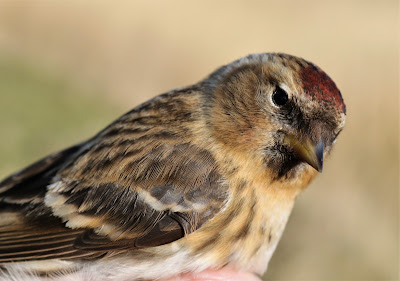 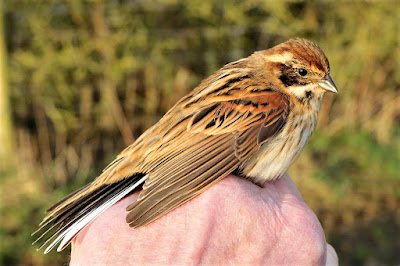 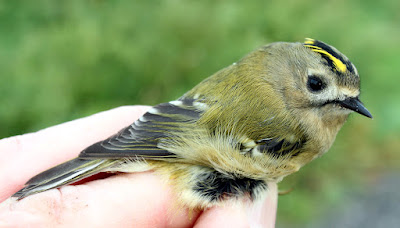 Goldcrest
Other birds seen and heard - 20 Linnet, 6 Lesser Redpoll, 3 Blackbird, 1 Kestrel and 1 Snipe. Wintering birds comprised over 300 Pink-footed Geese on nearby meadows where their stay will soon be ended by a flight to breeding grounds in Iceland. 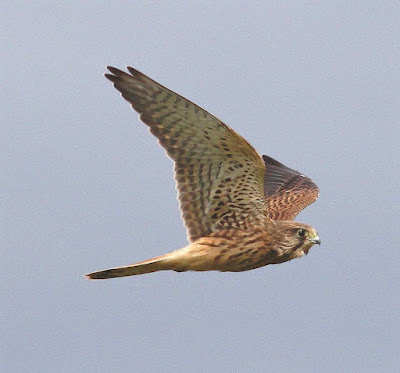 Kestrel
I disturbed the Snipe when crossing a still soggy field on my way to the seed plot and where over the winter we had caught Linnets. An escaping Snipe or two became a regular feature of most days when splashing across to the seed plot. The Linnets are no longer with us in any numbers with so many gone north, hopefully to the top of Scotland where with luck one or two will be recaptured by Scottish colleagues. 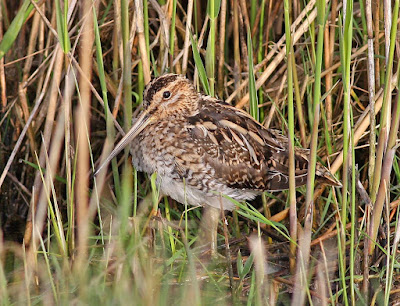 Snipe
Back soon. Maybe even Saturday if these winds stay down and high pressure stays around.