At this time of year, our avian Norse visitors start gathering together in flocks, feeding frenetically, laying down fat to enable them to return to Scandinavia. This Viking army consists of Fieldfares, Redwings, Starlings, Blackbirds and even Linnets, as some of our Linnets that winter in northwest England, breed in Orkney, a Viking kingdom of old. These Vikings are very much a part of spring migration as they are of autumn migration, but I suppose in the autumn we look forward to, and herald their arrival, but tend not to in spring. It's the same with our summer migrants, it's their arrival, and not their departure that we celebrate.
Of course, the Vikings didn't just come from Scandinavia, they settled in Iceland and Greenland too, and earlier in the month when I was completing a late wintering bird survey on the west Lancashire mosses, a flock of five Whooper Swans flew over me heading north. Their ultimate destination will be Iceland, but these birds won't be heading that far just yet.
Woodpigeons are still flocking, and feeding in numbers on the mossland, and I had a flock of 409 perched up in some tall willows surrounding a group of ponds and alongside drainage ditches, out on the moss.
Towards the middle of March, I was back in northwest Lancs at two of my wintering bird survey sites. Site number one, closest to the Ribble, was very quiet indeed, and the highlights here were probably some of the encounters I had with the six Brown Hares that I recorded. There are a few shots below of some of these gorgeous animals. 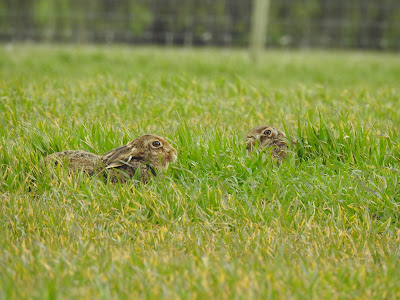 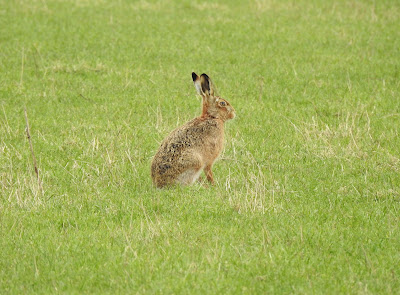 I recorded nearly thirty bird species during the survey, but I'm struggling to pick out any highlights. Raptors were thin on the ground with just two Buzzards, and the Viking army certainly wasn't gathering here, with just a single Fieldfare and Redwing.
The following day I was at site number two, which is probably mid-way between the Ribble and the Wyre, and it was here that I encountered the returning Viking army.
It's nice to see this area of arable land starting to come to life with at least four pairs of displaying Lapwings, and six singing Skylarks. A flock of 23 Common Gulls is worth mentioning, as is the three Buzzards that I recorded. In fact, the Buzzards were the only raptors that I had.
It was a cold morning with clear skies, and the 15 - 20 mph south-easterly wind was biting, so much so that I had to move my VP slightly. By the nature of what they are, VPs are often exposed, but I managed to move towards the lee of a hedge close by, without it having any impact on the results.
In front of this VP is a stubble field, and it was here that the Viking hordes were gathered. The most numerous being the 1,453 Starlings that foraged in the stubbles, with a supporting cast of seven Redwings, 215 Fieldfares and 81 Linnets. Below are a few shots of some of the Fieldfares. 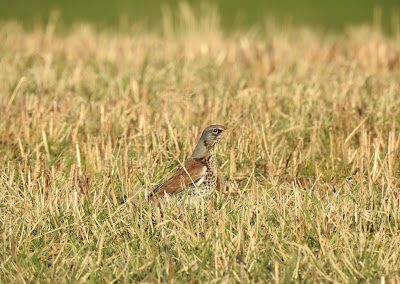 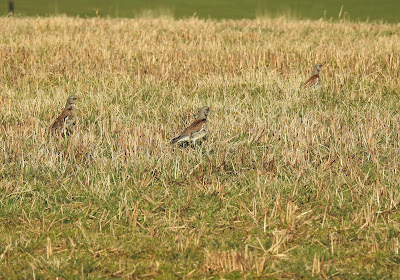 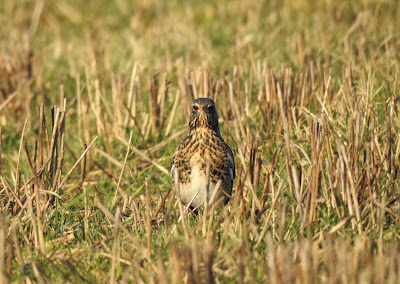 This Viking warrior was watching me very closely!
It won't be long before these birds are winging their way back to Scandinavia.