Saturday 26 March. There was a cold start at 0600. The temperature gauge displayed 2°C as I erected nets alone while musing over what the next four or five hours might bring.
During the week bird news from Merseyside, North Morecambe Bay and North Wales confirmed my observations of the early week - low-key migration with small arrivals of Chiffchaffs, Lesser Redpolls, Goldcrests and Wheatears, together with unusually low numbers of Meadow Pipits in the run of clear-cold mornings.
In North Wales there was an early Willow Warbler on Thursday 24 March together with nine Black Redstarts! I was expecting most of the above but definitely not a Black Redstart, although it was almost 12 months ago to the day of April 1st 2021 that I unexpectedly saw a Common Redstart perched at the gateposts. 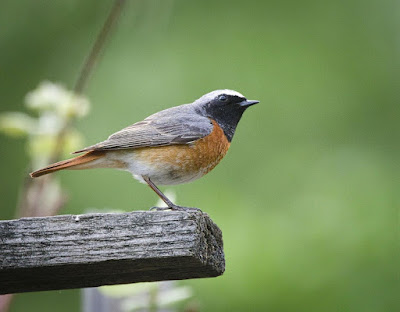 Common Redstart
By 0630 I was up and running with a cup of steaming coffee, the car ticking over and the heater turned to “Hi”.
This site at Pilling is certainly good for Reed Buntings, already the most ringed bird here for 2022 with another three on the books today. 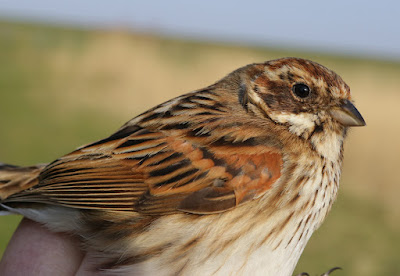 Reed Bunting
In the furthest mist net lay yet another Brambling, one that at first glance looked identical to the Brambling caught on Thursday. When I turned the bird over to begin extracting there was no ring on either leg and I could see that this was also a second year female, marginally paler than the one of Thursday.
Unlike us in the grey winter of Northern England the Bramblings may have faded in their winter sun destinations of France, Iberia or The Cornish Riviera. 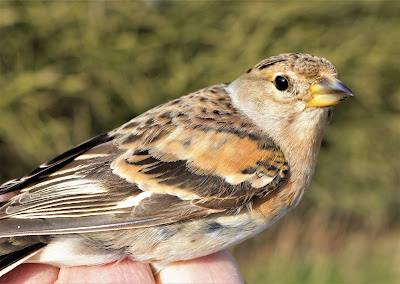 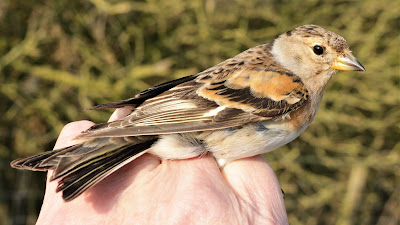 Brambling
From here on the west coast Bramblings have a long journey yet before they reach their eventual destinations of Scandinavia and further east, into that presently troubled part of Northern Europe. Bramblings breed in coniferous and birch woodlands in much of Scandinavia, a large part of Russia, and northern Kazakhstan and Mongolia.

Brambling Range in Europe
I gradually shed layers of clothes as the sun rose higher and grew increasingly warm. Unfortunately the clear blue skies and zero wind probably helped birds to move off site very quickly. A couple of Lesser Redpolls, 2 Pied Wagtails, Blackbirds and a singing Chiffchaff all evaded the nets and I was left to birdwatch rather than ring birds. 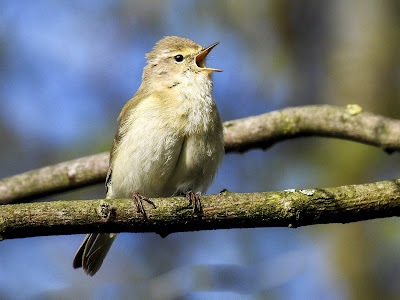 Chiffchaff
There were lots of “pinkies”, Pink-footed Geese, around this morning, with perhaps an influx of those that wintered in Norfolk and South Lancashire, birds now ready to set off for Iceland. There seemed to be many hundreds, even thousands, over 3,000 of them when they panicked from their feeding in the Cockerham meadows when the regular aircraft climbed off from Black Knights Parachute Centre loaded with thrill seekers. 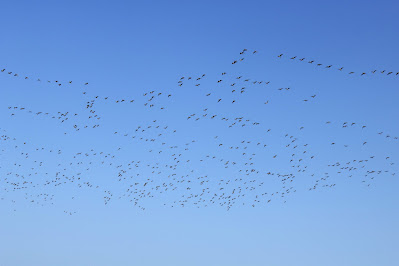 Pink-footed Geese
For adrenalin junkies there’s the opportunity to throw your body out of a light aeroplane for as little as £199 with a “One Jump Taster”.  With luck you will land in Cockerham and not in Morecambe Bay. 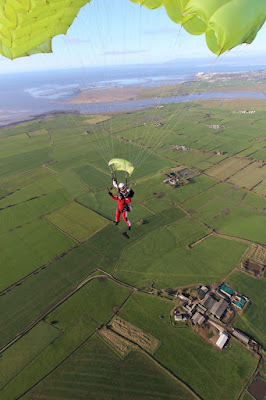 Black Knights Parachute Centre - Cockerham Marsh
I think I will give that a miss, stick to solid ground and watch from below rather than have the ground rush up to meet me.
Other birds seen today – 3 Little Egret, 2 Skylark, 1 Buzzard, 8 Linnet, 1 Lesser Redpoll, 2 Meadow Pipit.
Andy is back from Egypt this weekend, keen to show off his sun tan and eager to get out ringing again, if slightly miffed to miss two Bramblings. Let’s hope bird numbers improve soon for his ringing fix.