....and some interest in the garden.
On a beautiful calm spring day, it was good to get myself on Harrisend for 3 hours on Thursday, to find 6 Stonechat, seen as two pairs and a lone male and female, almost certainly having mates which I failed to see and make four 'probable' breeding pairs to date on Harrisend.
At least 13 Meadow Pipit seen, 2 Wren, 3 Dunnock including a male displaying to a female, 3 Red Grouse, and a male Reed Bunting, which was initially tricky alongside a male Stonechat, both in the far distance, 10 Greylag overhead flying west. 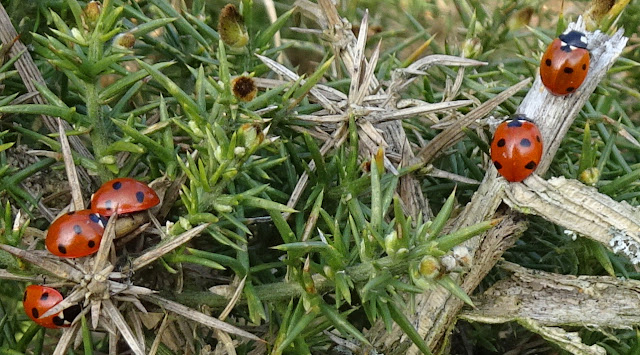 Five of fifteen 7-Spot Ladybirds. Pete Woodruff.
I found 15 7-Spot Ladybirds in four small clusters on Gorse, and saw 2 Peacock butterflies.
Two hours on Hawthorthwaite, produced 3 Stonechat, seen as a pair and a lone male. Also, 8 Red Grouse, 7 Meadow Pipit, and 3 Wren. The bonus bird was a Woodcock, flushed and flew about 400m to go down by Catshaw Greave.
I was grateful for the report of 2 Barn Owls seen on Wednesday, one of which was reasonably obvious to have been the same one seen by me at and around the foot of Hawthornthwaite on 20 January, the other seen at the woodlands at the bottom of Cam Brow. Reasonable to suggest perhaps these two Barn Owls are a pair....Many thanks for this Simon.
Interest In The Garden.
There was a lot of enjoyment to be had in the garden this week, with visits by Bees, Butterflies, Birds, Hoverflies, and a colourful if nasty little critter.

With some video footage made, a visit to see the Reed Bunting in a Brookhouse garden was a success. A bit of a surprise, and not the bird to be found on your feeders on a regular basis, and not one I'm expecting ever on mine in urban Lancaster. 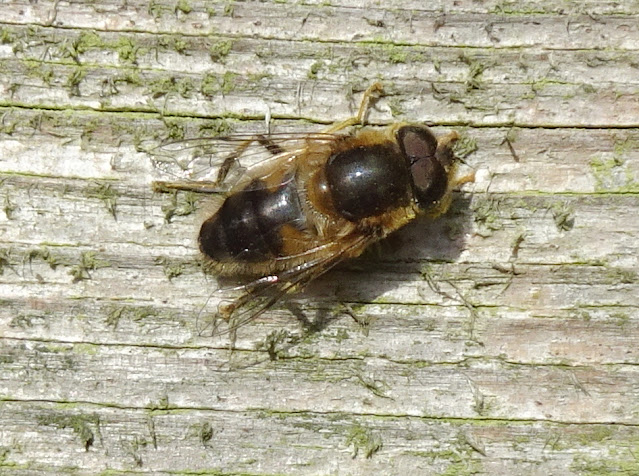 European Hoverfly. Pete Woodruff.
The Eristalis pertinax found in our garden, developed into something a little more interesting, in that I discovered the larva of this hoverfly is the Rat-tailed Maggot, one of which was seen in the garden pond last year....The larva's name doesn't conjure up anything of beauty does it!
Tree Bumblebee on Pussy Willow 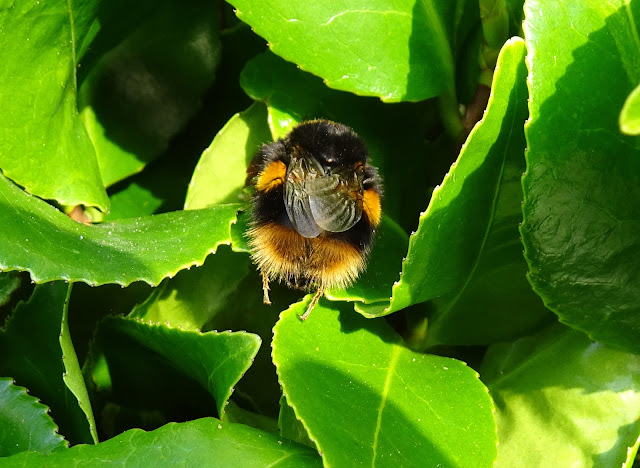 Buff-tailed Bumblebee. Pete Woodruff.
As the most familiar bumblebee, this Bombus terrestris was basking on Camellia in the garden, unfortunately giving a rear view only. 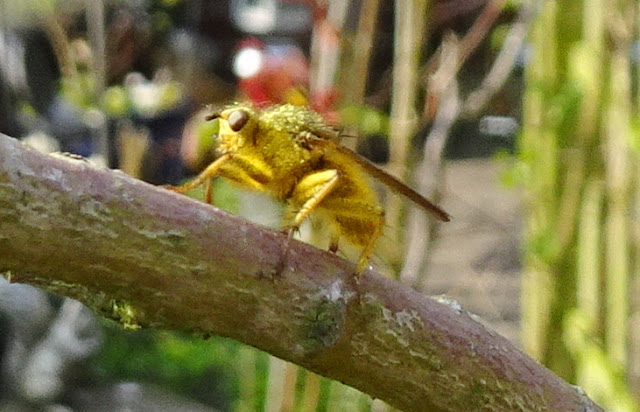 Yellow Dung-Fly. Pete Woodruff.
Couldn't miss the golden-furred male Yellow-Dung Fly on the branch of a Willow in the garden yesterday.
Footnote.
Hard to believe in the 21st century, but as my experience has clearly shown, you can spend 5 hours in the Forest of Bowland like I did today - often spending much more time than that - and not see a single bird of prey....Hen Harrier, Red Kite, Merlin, Sparrowhawk, Buzzard, Peregrine Falcon, Short-eared Owl, Kestrel.