A walk through the park proved eventful, with a pair of Mistle Thrush found to be nesting in a Sycamore, also up to 10 Chiffchaff mostly heard, though one bird gave excellent views. Also noted, 16 Blackbird, 5 Nuthatch, 5 Robin, 4 Great Tit, a Wren, and 2 Long-tailed Tit.

Two Herring Gull and a Lesser Black-backed Gull were at the pond in Williamson Park....Well, you can't call 'em 'seabirds' can you!

On to the cemetery which also proved to be eventful, in that I had another sighting of at least 3 Bullfinch which were seen short of 1/3 mile east of the male I found in the area on 17 December last year. These sightings have been made on inaccessible/private land unfortunately. Also in the cemetery, I found 2 Nuthatch behaving in a manner that made it likely to become a breeding site.

Making a return visit the following day, I watched the male Nuthatch coming down the tree and appear to feed the female a small food item through a hole bottom right of the split in the trunk....So, a bit of interest here to keep me on my toes for a few weeks.
The Garden.

Butterflies and Bees have been visiting the garden recently, particularly the latter, this Tree Bumblebee and the Buff-tailed Bumblebee were showing the benefit of our Pussy Willow.

We had the pleasure of a visit by a Greenfinch to the feeders. A declining species and scarce visitor to our garden. Footage through the kitchen window, and a little too enthusiastic with the zoom....Well thats my excuse anyway. 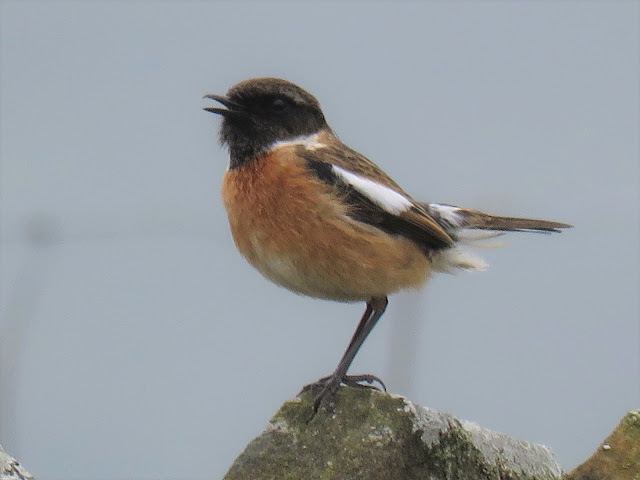 Stonechats....In the first quarter of this year to 31 March.

With no duplications, I have noted 137 Stonechat individuals in 71 records taken from FBC/LDBWS websites. Only 5 of my personal records are included in these, and are represented by 15 Stonechat, 9 of which are now on territory.

I have categorised these Stonechat records as 30 wintering birds seen from 2 January until 27 February, the early date migration took off, when 13 Stonechat were seen by a birder on one birding date.