In the middle of March, Gail and I checked our net rides in the reedbed and scrub at the Nature Park to see if we could actually get in. During the winter months our ringing area floods, and in recent years it has been as late as June sometimes before we have been able to start ringing again after the winter. We guessed that there might be a half-chance, as the area where we park our car wasn't flooded. We ventured in wearing wellies, and surprise, surprise, managed to get to our net rides. There was some water at the lower end of the rides, but there was enough of the rides not flooded to enable us to do some ringing. We took some tools into the Willow scrub with us, just in case we could to do some management work, and we coppiced some of the Willows along the net rides. All we needed now was some decent weather and a few birds. 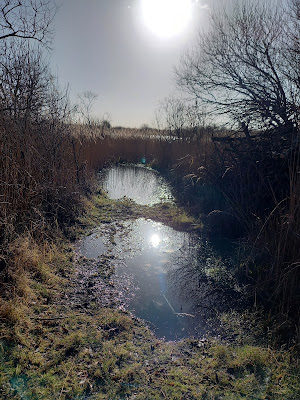 There's something magical about being in a reedbed! 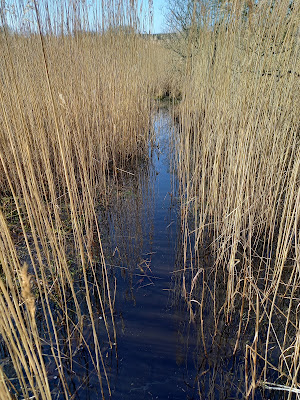 The decent weather sort of materialised, in as much as it was calm, but it was cold, and this had an impact on the number of birds that we ringed. We have had three ringing sessions so far, and all we have managed to ring are three birds; a Greenfinch, Chiffchaff and Long-tailed Tit. In fact, the third session that we had, we drew a complete blank! 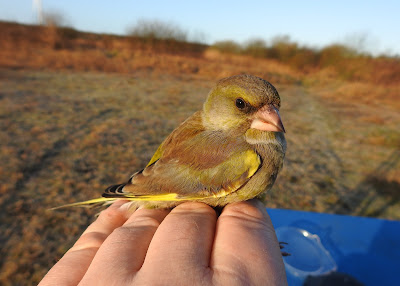 Greenfinch
On the morning of 18th March when all I ringed was a Greenfinch, a flock of 60 Pink-footed Geese and 27 Whooper Swans headed northeast, and other than three Meadow Pipits heading east, and a singing Chiffchaff, this was the only evidence of migration.
Four Cetti's Warblers are regularly singing from the area that our nets are in, and three Reed Buntings were singing also. A pair of Goldfinches were nest building, so some real evidence of birds starting to prepare for the breeding season. 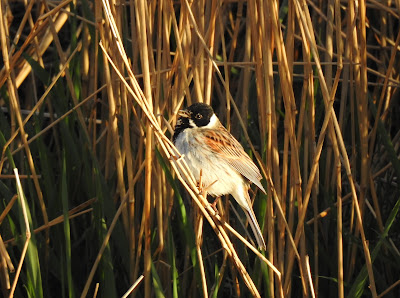 Reed Bunting
Out on the pools were five Snipe, four Shovelers, 81 Herring Gulls, two Mallards, seven Little Grebes, six Tufted Ducks and 27 Coot.
I was back the following weekend, and doubled my catch of the previous weekend by ringing two birds, the aforementioned Chiffchaff and a Long-tailed Tit. The Long-tailed Tit was probably a local breeder, and a male, with evidence of a developed cloaca. 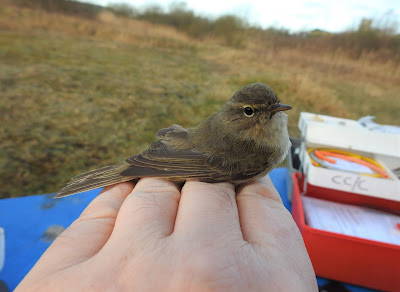 Chiffchaff
It was another cold morning, but there was evidence of a little more migration. There were seven grounded Redwings in the Willow scrub, and a flock of 37 headed east. Other visible migrants, all heading northeast, included two Carrion Crows, nine Meadow Pipits, three Lesser Redpolls and a Brambling.
I was back again on 2nd April with Alice and John, and that was when we drew a blank. A couple of highlights of the morning were my personal earliest ever Yellow Wagtail. We sadly didn't see it, just heard it, and by the calls it sounded like it had been flushed from the ground by some dog walkers. The other highlight was a pair of Ravens that flew over the pools croaking loudly, and being mobbed by a pair of Carrion Crows.
There's half a chance that we will get out to the reedbed and scrub again this coming weekend, but whether it will produce any birds, who knows, but I'll let you know.
Looking back to this date in 2017, it was a completely different day for migration. I was at the coastal farm fields with virtually clear skies, with a light north-westerly wind, and there was a good bit of visible migration. I recorded 165 Linnets, 161 Goldfinches, seven Carrion Crows, three Alba Wags, five Siskins, a Lesser Redpoll, four Swallows, a Sand Martin, two White Wagtails and 835 Meadow Pipits all heading north! That's what makes migration so interesting!