I have been looking forward to meeting up with Insectpedia - A Brief Compendium of Insect Lore, the latest in the Princeton series of “Pedia” Books. My first acquaintance with this family of books came via Birdpedia in 2021 - Birdpedia .
And here is Insectpedia which is not on general release until early May but can be pre-ordered now from Princeton the publishers or other outlets. 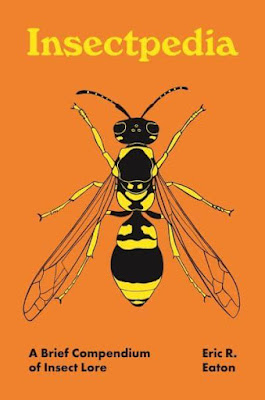 Insectpedia- Princeton Press
Princeton’s Pedia books are encyclopaedic but tiny in size; the series travel the wonders of the natural world, from A to Z. These brief compendiums cover wide ground in sympathetic, often funny, but always fascinating entries on the science, natural history, and culture of their subjects, e.g. Dinopedia, Geopedia, Treepedia, Birdpedia, Florapedia and Fungipedia.
Every birder knows that birds and insects have a close relationship, in many cases interdependence based upon the fact that many birds eat insects; some eat them all year round, and migrate long distances to make sure of an abundant supply. Others eat them in the summer months and then switch to a more varied diet in winter when there are fewer insects around. Lots of bird species also feed insects to their chicks.
Insects are an important part of the diet of hedgehogs, spiders, bats, fish, frogs and toads. Some insects eat other insects, including wasps, beetles like ladybirds, and ants. Another crucial role that insects play is in pollination, helping plants turn their flowers into fruits. They also contribute to the breakdown of plants and animals after they die, helping to keep our environment clean.
Insects have been a part of the human diet for many thousands of years, and many cultures still relish insects as food. Increasingly the cultivation of nutrient- efficient insects may be seen as a way of feeding the booming human population. There’s food for thought! 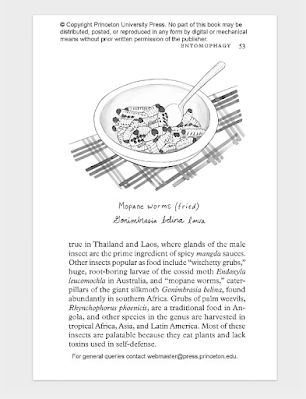 Insectpedia- Princeton Press
Insectpedia has an explanatory Preface with hints as to what a reader should expect, but unfortunately there is no list of Contents, nor at the back of the book, an Index. This is only slightly irritating, whereby as well as a cost-saver it could be a deliberate ploy to make the reader visit and enjoy every page in one or two sessions, something that I was happy to do.
Each subject matter has but one or two pages in which to grab the readers’ attention and Eric R. Eaton’s engaging, enthusiastic style invariably tempts the reader into his lair and looking for more. 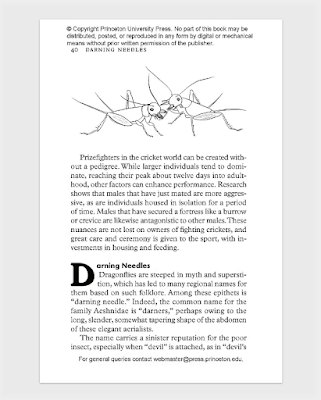 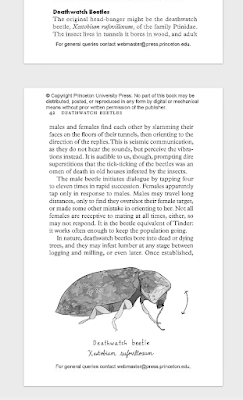 Insectpedia- Princeton Press
There are dozens of entries in the 200 pages and many “chapters” of these miscellaneous chunks of reading set in in alpha order with topics ranging from ‘A’ for Acarinaria, bees or wasps that carry squadrons of cleaning mites, right through to ‘Z’ and Zombie Lady Beetles. In between there are Camel Crickets, Exploding Ants, Jumping Beans, The Schmidt Sting Pain Index, and Flea Circus, the latter a remarkable and unlikely entertainment that thrived as late as the 1980s. Yes, millenniums, I remember as a pre-Internet child being taken to see one such circus where I emerged into daylight enthralled if a little itchy. 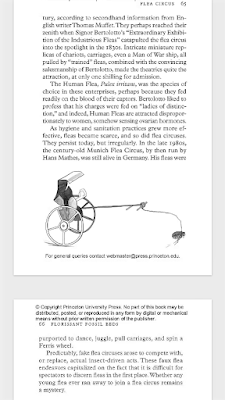 Insectpedia- Princeton Press
Vespa mandarinaria aka “Murder Hornet” tells a cautionary tale of how global media, irresponsible journalism and click-baitery can induce widespread irrational fear. Now where else have I read that recently?
Eric R tells the tale of the Weta, or Wetapunga, the Maori name for the Giant Weta, a nationally endangered species of New Zealand but now confined to a few remote islands. This three inches long beast lays claim to being the world’s heaviest insect by weighing in at over 70 grams, the weight of our UK Song Thrush.
Who knew that we Homo sapiens share 60% of DNA with Drosophila melanogaster and that 75% of the genes known to cause human disease can be found in fruit flies? Insectpedia is crammed with such curious facts and figures about the creatures we love to hate or to fear in equal measure.
And while Hilltopping may soon become the latest trend in sexual penchants at your local park, it is a way that some butterflies, wasps, ants, beetles and dragonflies use promontories as rendezvous sites for mates. Hilltopping is a form of lek polygyny, or lekking, a term familiar to all birders.
This review with the examples above gives just a taster of the insect goodies found in this fabulous little book. It is highly readable, informative, engaging, occasionally witty, and mostly light-hearted in a way that should actively encourage a spirit of inquiry and further investigation from any reader.
Mention must be made of Amy Jean Porter’s black & white illustrations dotted throughout the 200 pages and which accompany many entries. These are mostly delightful or instructive, and occasionally chilling when combined with a specific subject, as in the Tsetse Fly portrait at Page 169.
Insectpedia is quite simply a terrific little book and amazing value for money in this rip-off age of consumerism. Eric R Eaton and Princeton must be congratulated for this latest winner in the series.
Please birders or otherwise, buy this book. At £10 it’s a fraction of the stinging cost of a tank of petrol.
Insectpedia- Princeton Press
Hardcover Price: $16.95 / £9.99
ISBN: 9780691210346
Published: May 3, 2022
Copyright: 2022
Pages: 200
Size: 4.5 x 6.75 in.
Illustrations: 51 b & w