And check out more blogs at the bottom of the page.

So continuing over the Easter Weekend, I just had to get more and more exercise and what better than Slape Lane here in Burton, together with visits to local woodlands and checking out Lancelot Clark Storth.  With bonusus of two Willow Warblers, two Chiffchaffs and at least one Blackcap and one Garden Warbler plus lots of Nutchatches...... the woodlands were "ALIVE"

The sun makes all the difference and gives you that extra! I had not gone long before I met up with the fabulous "Goldilocks" buttercups which unless you looked very careful could so easily be missed amongst the deepened backdrop of Lesser Celandine providing even more greens and yellows. I roughly surveyed the full area of Slape Lane and found a good split population at one third along and then again at the far end of the Lane by the crossroads, so there was not that much of it about.   I had only just recently discovered these beauties right on my doorstep thanks to Richard.  I took lots of photos over the coming days to try and highlight the features and profiles in readiness to make up a new page for my online "Flora of Hutton Roof", I think I have succeeded but you know how it goes, the photos are never quite good enough! but they will have to do for now.

Almost opposite on the same bridleway I found yet more Moschatel! perhaps 20 or so in the population. But just like someone said only a few days ago, once you find one population there is every chance you will find it everywhere.  This was yet another population on the bridleway itself, but only the day before I managed to find a whopping 12ft diameter population within the mature woodland and they they lived happily side by side of the widespread Ground Ivy.  I cant resist a photo even if I have taken the same thing a dozen times before (make that one hundred!). But I really do think that on this sitting perhaps I have got my best so far and soon I will move some of these over to my Moschatel pages. 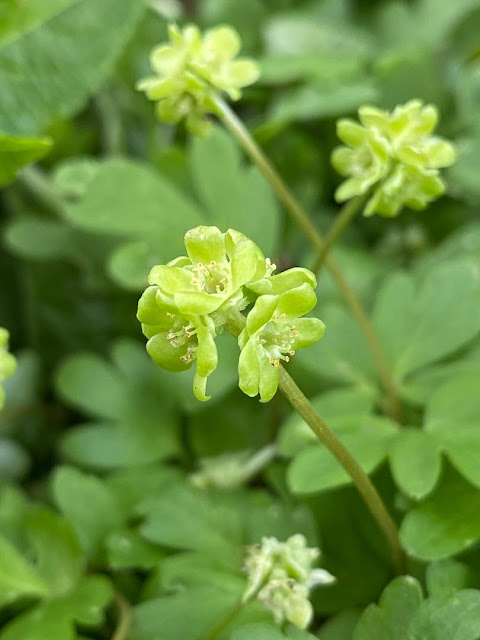 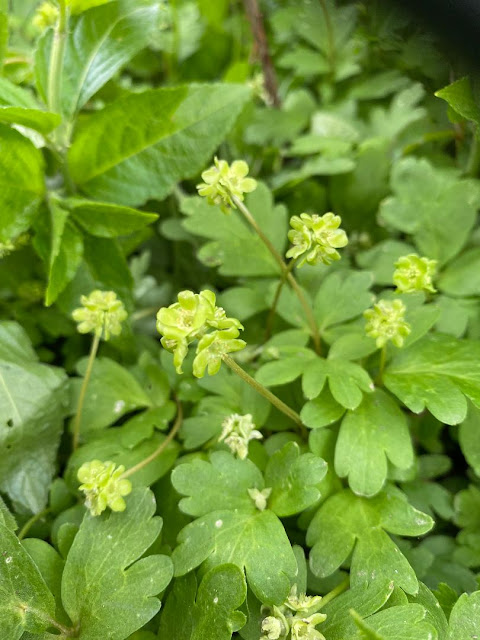 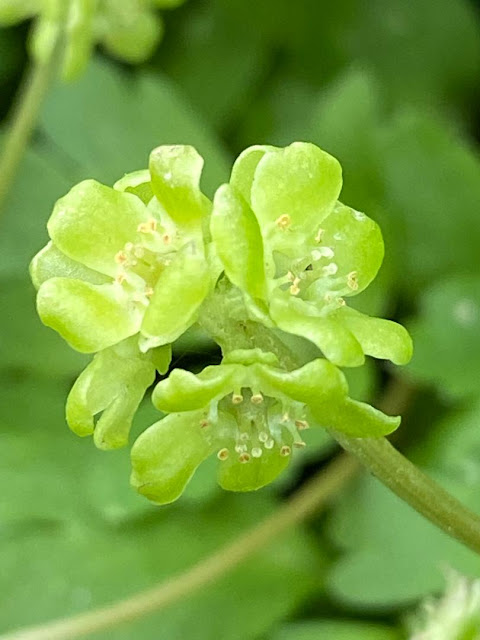 Also in the bridleway banks were lots of fresh growing Greater Stitchwort and early leaves and their tendtrils of Bush Vetch soon to be budding up. Perhaps too early for Red Campion, Cleavers and lots and lots of Cows Parsley, Hogweed, on their way.

Soon arriving at one of the ancient woodlands, I needed to spend time checking out the many populations of pastel yellow primrose tucked in between the carpeted Wood Anemone interspersed with hiding Ground Ivy, never ever seen so much, the ground ivy seemed to be everywhere, but I had my eyes set on "the special one" today, and soon I was not to be disappointed with another special one looking up at me!..... the rare False Oxlip, the hybrid between the primrose and the cowslip (Primula x polyantha). Thats three I have found now in separate ancient woodland over the past two years, BUT I am confident I will not find another.  This one today was even more special by having six (instead of five) lovely mid yellow coloured petals instead of five, but other than that as far as I could see everything was just how you would expect the hybrid to show, although if you was to be super picky and investigate and measure everything, there will be subtle differences I am sure. Here are a couple of photos showing the rarity. 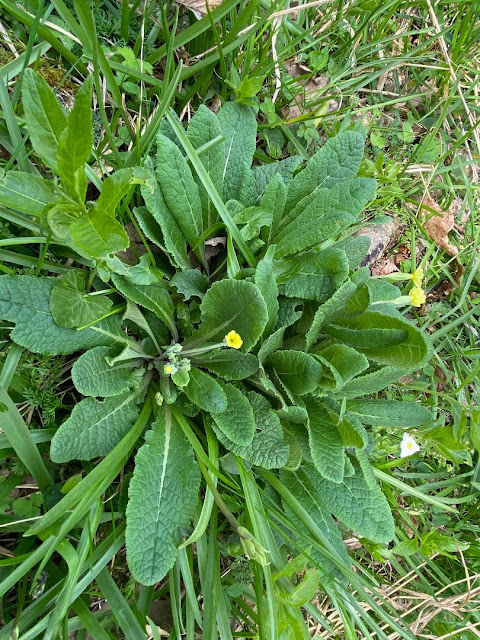 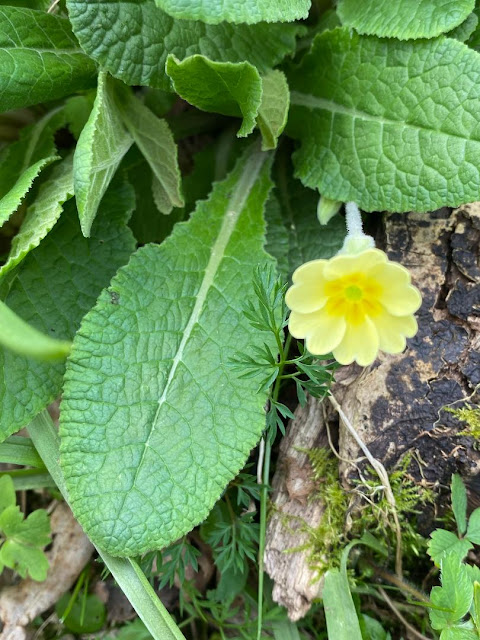 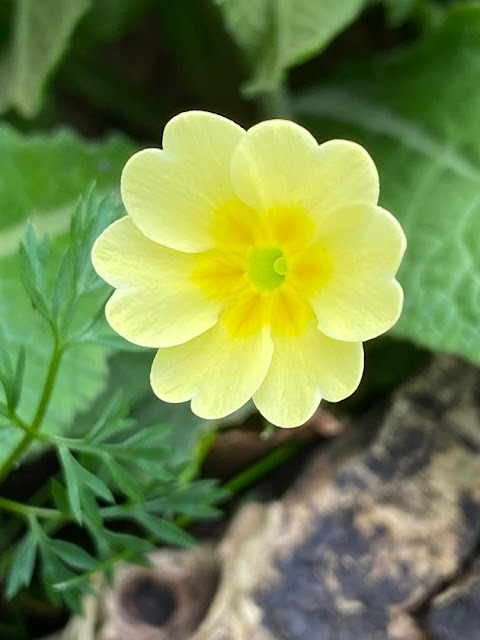 False Oxlip (Primula x polyantha)
I found large areas of ancient woodland which were carpetted with Ground Ivy, in fact I am sure the area I found today just has to be the largest sector I have ever recorded covering some one hundred yards diameter approx.
Ground Ivy 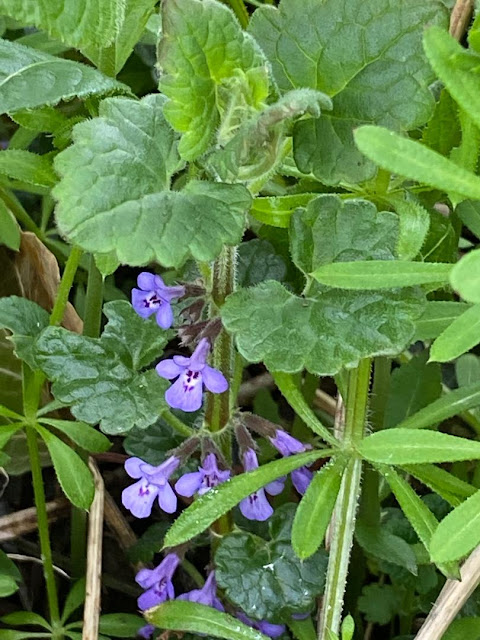 Wood Anemone (blushing!)
I love to find Wood Anemone which are beautiful starlets! with some of them covering 2", but has the month progresses I usually can odd specimens which start to show a little mixed colour ranging from pinks to purples, this colour seems to frequent with age.  I did find one showing in the carpet which had just started to get some of the pink (blushing. 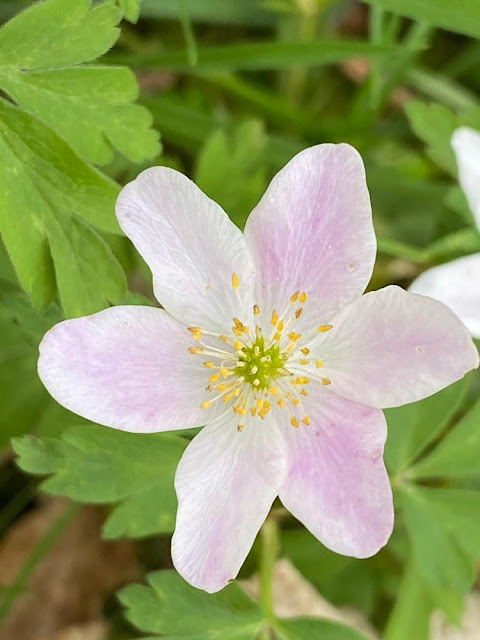 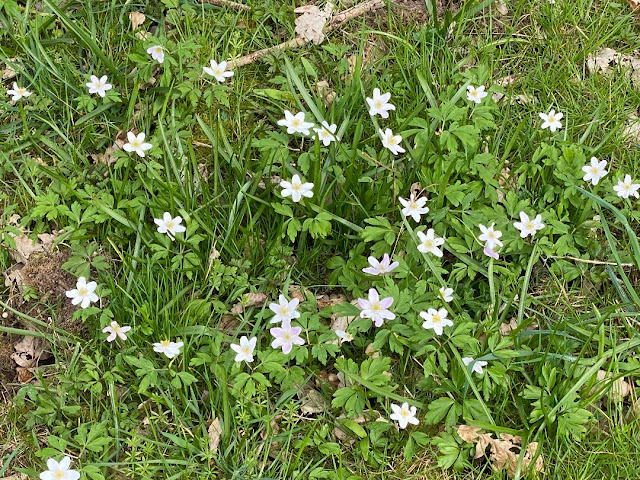 Carpet of Wood Anemone
Just a little further along the bridleway and soon you notice some drop walls which also look as though they are horse jumps leading into some private woodland which from the view looks like being a bluebell wood in the making.  Not far from hear is a stronghold for the beautiful "Water Avens" (Geum rivale) which with careful looking can be found in the sides. They are out now with just a few showing, but wait for another two to three weeks and you will if lucky see the most beautiful hybrid of the geums which hybridizes between both the Water and the Wood Avens and to which the yellow takes over the main colour of the dropped bellshapes.  Absolutely stunning and cannot await for their arrival.  The population here is good and there could well be up to 50 of the special hybrids.
Water Avens 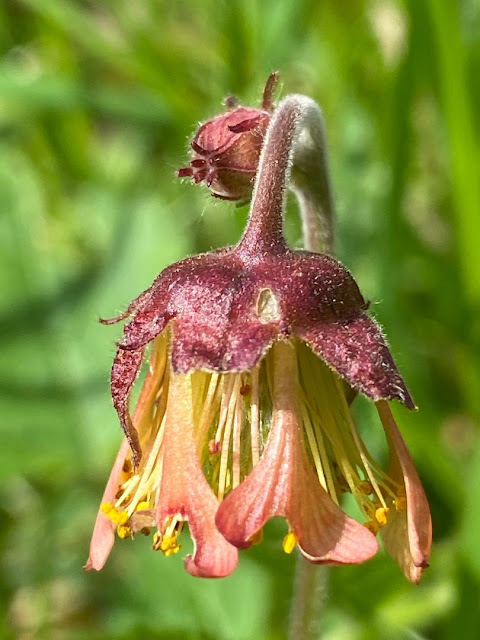 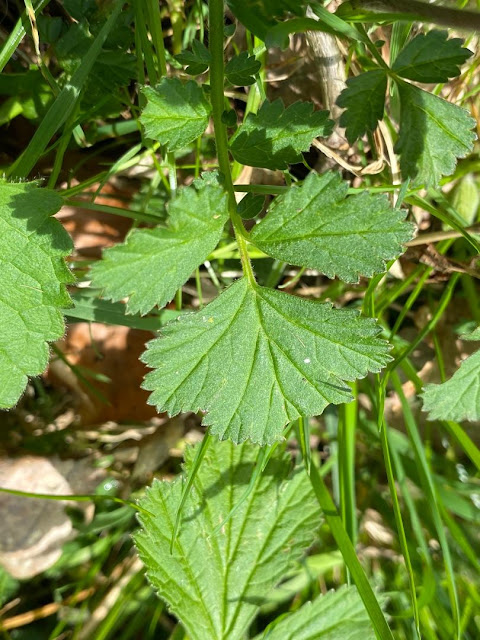 Water Avens - main leaf
Soon entering Lancelot Clark Storth and checking out over in Pickles Wood new growth of 3" rosettes of the Herb Paris making their way through, also plenty of Sweet Woodruff and soon to be Bugle
ELM ?
I know little about trees but one intermediate sized tree just stopped me in my tracks it was beautiful, with a shade of green so special, I took photos and think it is a ELM but not sure just which sort, I think perhaps a hybrid and maybe belonging to the Dutch Elm family but thats only a guess. Here are a few photos: 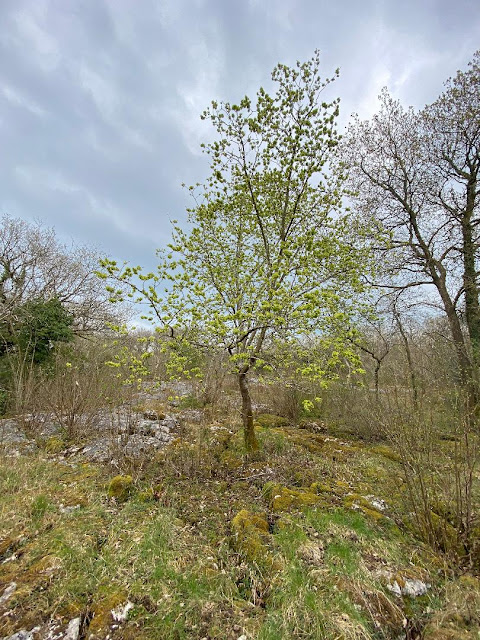 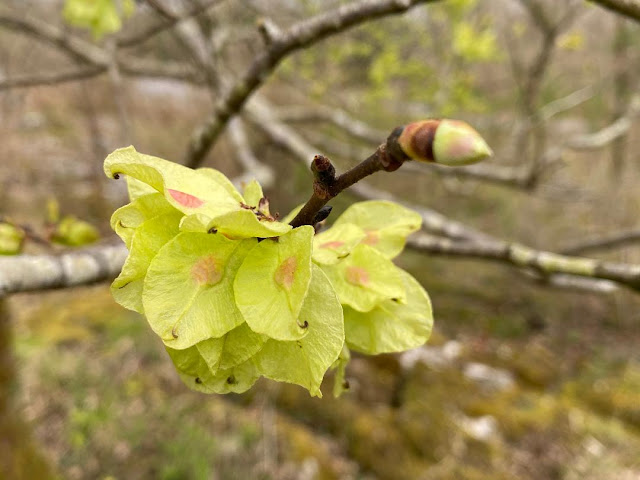 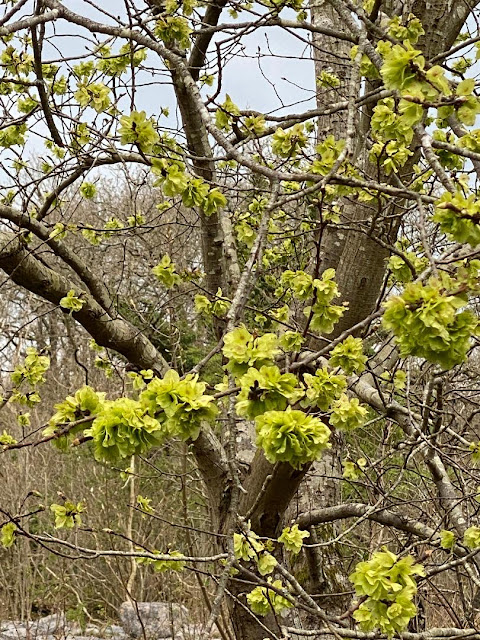 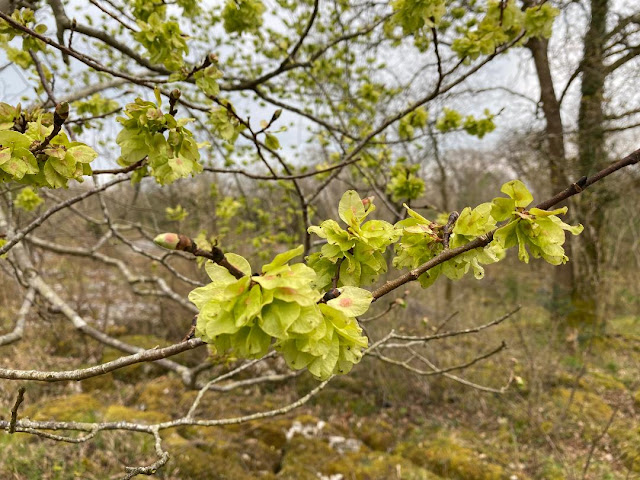 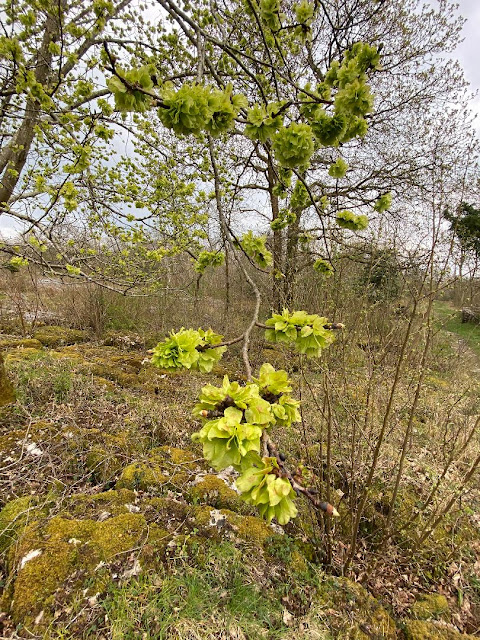 A little further on hoping to find the early year Spring Sandwort, a good spot which always comes up trumps and yes I found just a single flower no more!
Spring Sandwort 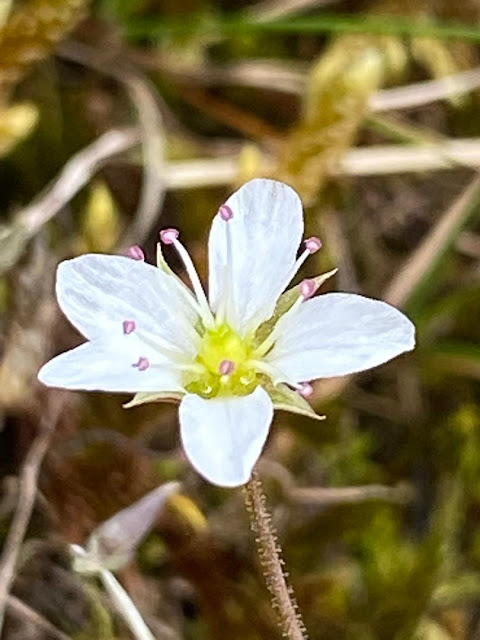 Nationally a very rare plant, but well established on Hutton Roof with two or three thousand in total.  Just here in Lancelot the numbers will be around the one hundred mark.  I love the contrasting red anthers.
Blue Moor Grass
Its not just a good area for Spring Sandwort, but over the next month or two will be a stronghold for the Common Rock Rose and the Northern Brown Argus Butterfly, there will also be Spring Cinquefoil, Field Madder, Angular Solomons Seal, Lily of the Valley, Scarlet Pimpernell, Common Cow Wheat and the rare grasses of Birds Foot Sedge and lots and lots of Blue Moor Grass. 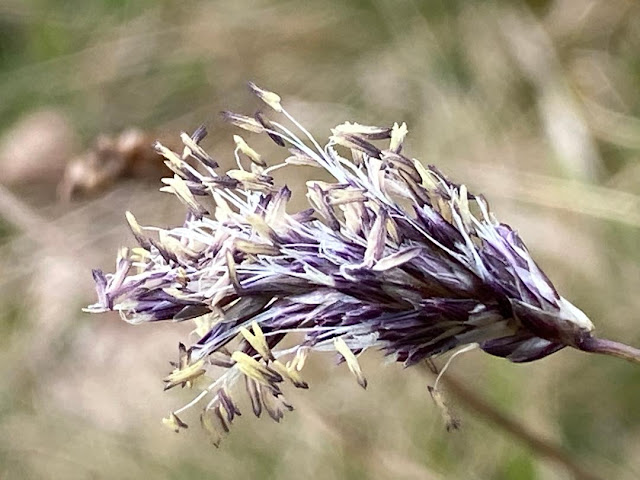 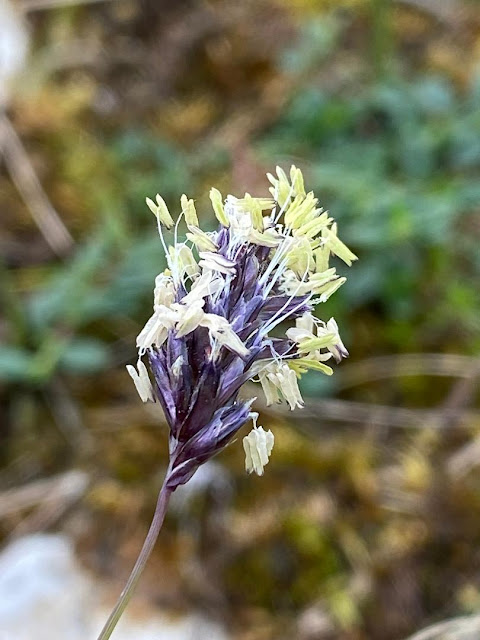 while here I though I would search for the Early Purple Orchids which were without doubt showing in very short supply this year, observations from two separate areas here in the bottom of Lancelot shown nil!
But my eye was immediately taken on this little posey of Rue Leaved Saxifrage, they are always something very special if you can actually manage to photograph them without the wind getting in the way.
Rue Leaved Saxifrage 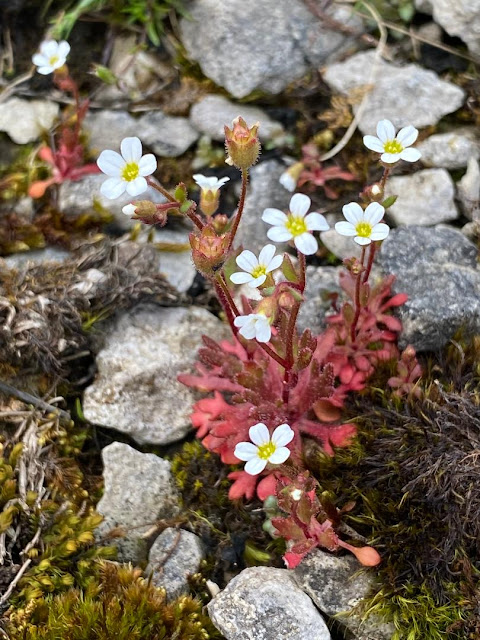