I'm not sure whether 'trickly' is an actual word or not, but it does describe the migration during this, and recent springs. Every year of late, the spring starts cold and dry, before turning wet and warm, just as sub-Saharan migrants, like Pied Flycatchers, are hatching. And by trickly, I am referring to the pace and volume of the spring migration. Birds are just trickling through in small numbers, rather than surges that we used to have. When we have a spring like this, migrants tend to filter through and straight on to their breeding grounds, and large coastal movements that excite birders are bypassed.
I have been exceedingly busy of late, with wintering/migrating and breeding bird surveys, in fact too busy to update the Blog. So, apologies for that. I'll try and bring you up to date, but I apologise in advance that it might get a bit lengthy.
Even though all my survey sites are away from coastal hotspots, I have nevertheless been able to observe the trickly spring. A couple of the farms that I have been surveying all winter, and into spring, are arable farms and there has been a lot of activity from displaying Lapwings. At one farm in northwest Lancs, I had six pairs displaying over one of the large arable fields, and it is a joy to hear and see these amazing waders. Skylarks have been similarly busy, and on the same farm in mid-April up to eleven Skylarks were singing their hearts out from the skies above.
Hirundines have been just trickling through, with low numbers of Sand Martins and Swallows heading north. Chiffchaffs and Blackcaps have been the main warbler migrant at this time, and on this particular farm I had four each singing away. Willow Warblers have been thinner on the ground, with just one exception that I'll come to later, and on this morning, I only had two males singing.
Changing the subject slightly, one or two Hedgehogs are regular in our garden every night, visiting the feeding station for a helping of dried cat food. When I get up in the morning, if it is starting to get light when I leave, I have to block the entrance to the feeding station as a local pair of Herring Gulls pull the newspaper out, in attempt to get to any left-over food, and shred it before it then blows around the garden!
Talking of the garden, on the 14th April I had two good birds in the form of a Raven that headed southeast and a Great Spotted Woodpecker that headed west. I can't think how many Ravens I have had from the house, but it's probably in single figures, but the Great Spot was only my second record!
As this trickly spring has moved on, I have been adding various new summer migrants for the year, and on 15th April I was surveying a farm near Wrea Green in the Fylde, and I had my first Garden Warbler for the spring. It might have been two, because I had one singing bird, and then another, but equally it could easily have been just one bird moving around. Other warbler species during the morning were just seven Chiffchaffs and two Blackcaps.
I had my first Whimbrels of the year, when a group of five headed north, and my first House Martin of the year, when it too headed north. Thirteen Tree Sparrows was a good count, and it was pleasing to note a singing Yellowhammer that seems to be holding territory on the farm. Besides all the singing that was going on, other evidence of breeding included a Coot sitting on the nest on one of the ponds, and a female Great Tit carrying nest material.
The following day, Alice and I had a ringing session at the Nature Park, and despite the full cloud cover and light SSE breeze, all we managed to catch was a retrap Blackcap. Interestingly, this male Blackcap was ringed at this site in August last year by Alice as a juvenile, so we know that this bird is exactly one year old. When we ringed it last year, it had probably hatched fairly locally, and now it was returning to the site to nest itself. 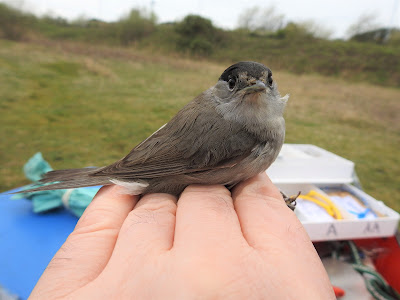 Blackcap
At least five Cetti's Warblers could be heard with their explosive song as we put the nets up, and a Grasshopper Warbler was 'reeling' away, which was another first for the spring for me. A singing Sedge Warbler and Whitethroat were new in, and my first records for the spring, and 40 Pink-footed Geese headed north. Over on the main pool we had a pair of Coots with two young, my first chicks of any species for the year. 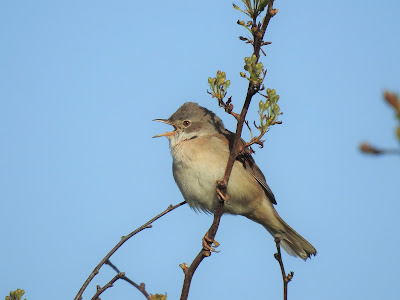 Whitethroat
I ran my garden light trap overnight on 16th/17th April and all I caught were singles of Herald, Hebrew Character and Common Plume Moth. I love the white feet of the Herald, that you can see in the picture below. 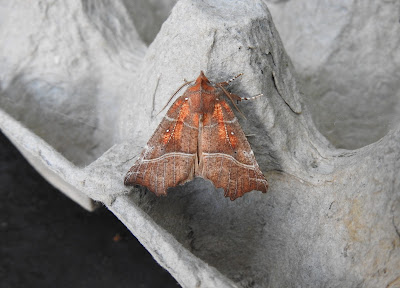 Herald (above & below showing it's white feet) 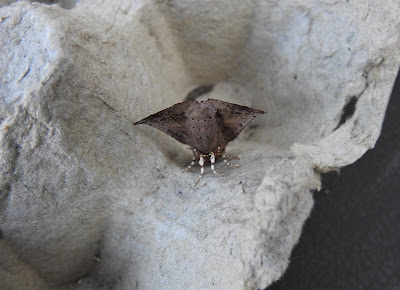 Gail and I had a very early start one morning in late April (3:00 a.m. alarm call - ouch) to survey a small area of farmland near Newcastle. It was a glorious morning with clear skies and a light north-westerly breeze, but it was very quiet bird-wise. Singing Skylarks and a fly-by Yellowhammer were the few highlights.
I mentioned earlier that I thought Willow Warblers had been thin on the ground so far during this trickly spring, and I still think that, but one site that I surveyed bucked the trend, and this was probably due to the habitat. I picked up some breeding bird surveys on a site close to the River Ribble, and it includes about 8 ha (20 acres) of Willow scrub. I recorded at least 14 singing Willow Warblers at this site. Other warbler species were present too, and I had 7 singing Chiffchaffs, 9 singing Blackcaps, 11 singing Whitethroats, and singles of singing Sedge Warbler and Lesser Whitethroat. So, a bit of a warbler fest. I'm looking forward to going back in a couple of weeks' time to see if anything has changed.
I had my first Holly Blue butterflies in the garden on the 21st, when at least two were flitting about. I mentioned an arable farm where I had at least six displaying Lapwings, and by the 22nd at least two females were on the nest. I've got to survey this block of farmland until early July, so it will be interesting to see what the productivity is like. Funnily enough, it was during this visit that I had my first Wheatear for the spring, a single female in a field down to potatoes, at least a month later than I normally expect my first. To be fair, I haven't birded the coast this spring, otherwise this wouldn't have been my first.
One of my regular wintering bird survey sites over this winter and into spring has been a great place to see Brown Hares, and a few days ago I was completing the last survey at this site and I encountered 21 of these magical creatures. It's not often that I record three species of Heron on my surveys, but on this morning, I had a Great White Egret fly in with a Grey Heron and drop into the dyke, and I had six Little Egrets keeping them company. 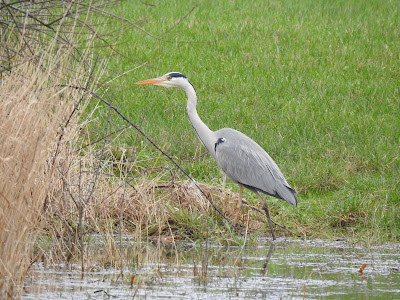 Grey Heron
It's been very hit and miss this site, although there have been some highlights such as Lapland Bunting, Snow Goose, Cattle Egret and Ring Ouzel, but there have been more misses than hits. So, it doesn't take much to lift the spirits and a Grasshopper Warbler 'reeling' from a hedge and ditch just outside the village where I park my car was welcome.
From my first VP, as the early morning sun was low, it looked as if there were coloured jewels scattered across the field of wheat. I could see white, yellow, orange, red, blue, violet and green, which was in short, the light refracting through the droplets of water on the end of the wheat leaves. I took a closer look at these droplets of water, that looked like a glass globe fastened to the end of the leaf. I photographed a few, and they look like glass baubles with a garden in miniature contained within. Have a click on the pics below and you'll see what I mean. 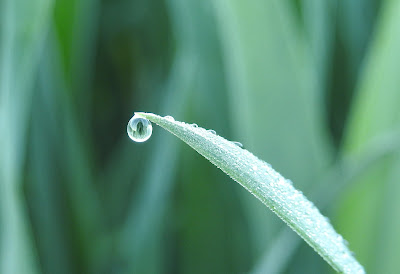 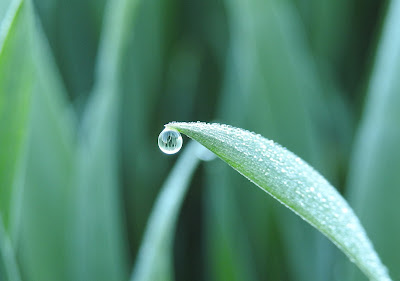 It's great when spring works its magic, and it certainly did in a very simple way a few days ago. It was another early start, at another long-term wintering bird survey site in northwest Lancs, an area of pastoral farmland with associated hedges, ditches and an area of scattered scrub and reeds. I was walking across the area of reed and scrub, when suddenly behind me a Tree Pipit started singing. The site isn't in Tree Pipit territory, but in the lowlands of northwest Lancs as I said, and as I turned round, I could see it perched on top of a Willow singing away. I enjoyed the moment for a short while before thinking about taking a picture, but before I could raise my camera it was off. And as it flew away, it was joined by a second bird. Not a rare species, and I record them on vis every spring and autumn in reasonable numbers, but just great to hear and see it out of context. These two birds had probably just stopped off during migration, in what superficially looked like Tree Pipit habitat.
Another reeling Grasshopper Warbler at this site, but this time on the edge of some woodland, and a supporting cast of five Willow Warblers, four Blackcaps, four Chiffchaffs, four Whitethroats and two Lesser Whitethroats.
I added two more new species for the spring when I was back at my arable farmland survey site. When I set off to walk my transect I had nearly full cloud cover with a light easterly wind. Adjoining the south-east boundary of the site is a small lake, with a couple of smaller reed-fringed pools, and here there were two singing Reed Warblers, my first for the spring, accompanied by three Sedge Warblers.
Walking away from this area, I could see a passerine perched up on the fence that looked very chat like even through the naked eye, and as soon as I got my bins on it, I could see that it was a female Whinchat. Nice. In addition to the Whinchat, I recorded a couple of House Martins, three Chiffchaffs, just one Willow Warbler, a Lesser Whitethroat, eight Whitethroats, three male Wheatears and a pair of White Wagtails. Nothing mega, but a pleasure to be out as always. 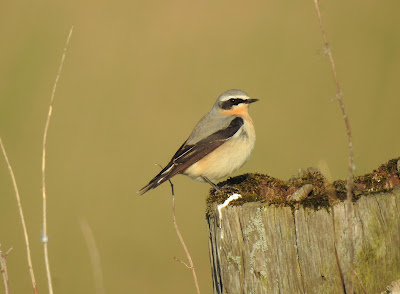 Wheatear
I came across an interesting piece in the Scottish Ornithologists Club (SOC) e-newsletter, The Hoot, about the colour of migratory birds, and I have detailed the salient points below.
The recent discovery that migrating Great Reed Warblers and Great Snipes increase their flight altitude after dawn, sometimes by thousands of metres, adds a potential new challenge: overheating. Flying high, where air temperatures are low, could allow migratory birds to dissipate the heat absorbed from the sun during diurnal flights, when there is no way to avoid the sun. If this is the case, migratory birds should also be lighter coloured, because lighter coloured animals absorb less solar radiation, and stay cool even when there is no shade. A recent study encompassing all species of birds found general support for this hypothesis, since migratory birds are on average lighter coloured than residents and long-distance migrants are lighter than short-distance migrants. Interesting stuff!