Four healthy Avocet chicks emerged from the nest on Conder Pool Thursday morning, they were surviving into their third day on Saturday.

I'm grateful to Howard Stockdale for the excellent footage he sent me....View the videos Full Screen.

I made no total counts on this visit, but note there are several Avocet on nests. Also noted, 4 Common Tern, 2 Little Ringed Plover, and a Common Sandpiper which obliged and came feeding close by.
At least 250 Knot and 52 Black-tailed Godwit were in the creeks with 2 Greenshank. On a wander round the circuit, singing Sedge Warbler and Reed Bunting upstream from the road bridge, 4 Greenfinch in trees by the Stork Inn. Hirundine numbers generally appear low to date, but 8 Swallow were around Conder Green Farm, and 2 House Martin had arrived back at River Winds, with 2 Chiffchaff at the picnic area. In the field by Saltcote Brow at the north end of Jeremy Lane, 3 Wheatear.
My visit to Cockersand was never going to be called eventful today, but a healthy number of Lapwing on territory, look set to have a good year here. For the first time in my records, I've seen no agricultural activity recently, and not a tractor in sight....yet!
My only other notes were, a White Wagtail with Pied Wagtail on the spoil heap by Lighthouse Cottage, with a pair of Reed Bunting seen, and the lone Whimbrel in my header and the video below, on the ebbing tide at Plover Scar.
Satellite Doves.
The Collared Doves decided to nest on the bracket behind the satellite dish on our neighbours house, the two young were roosting there last evening.
And Finally....The Bee. 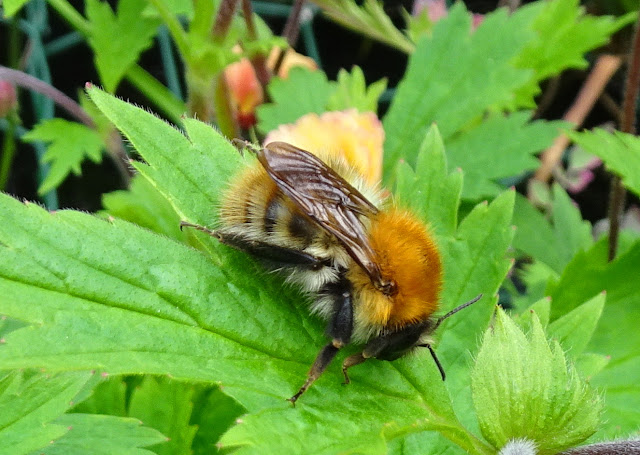 Bombus pascuorum. Pete Woodruff.
This queen Common Carder-Bee spent a little time on Water Avens by the pond in our garden.