A week ago today I had a breeding bird survey (BBS) at a site that I have blogged about all autumn, winter and spring, and my surveys there will be shortly coming to an end, just three more to do. I had full cloud cover during the survey, and the wind was just getting to the top end of where you can complete a survey successfully, with a WSW 4 - 5.
It wasn't an amazing survey, as surveys go, but a surprise was the flock of 32 Tufted Ducks on the fishing lake. I suspect that Tufted Ducks breed on this lake, as there are some quieter corners, and a few smaller pools associated with the main body of water, but a flock of 32 of these stunning monochrome diving ducks in mid-May, is noteworthy. 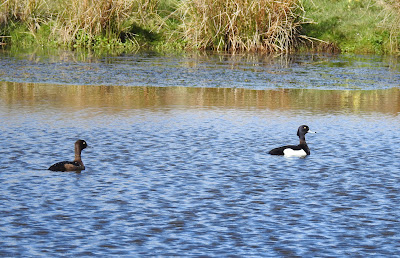 Tufted Ducks
What about the breeders? Warblers topped the table in terms of singing males, and I recorded a Willow Warbler, a Chiffchaff, six Sedge Warblers, a Reed Warbler and ten Whitethroats. Six singing Skylarks would hold a good position in the table if it was opened up to all passerines, as would seven Wrens and two Reed Buntings. 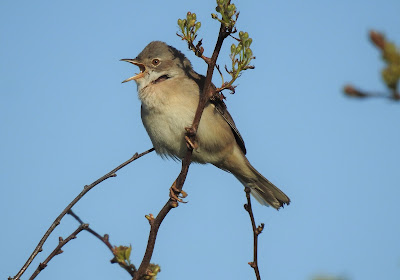 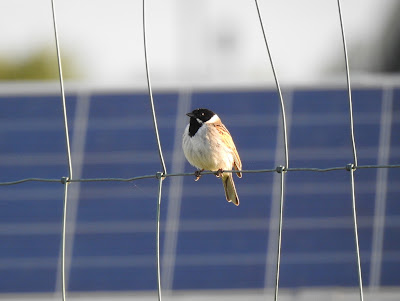 Male Reed Bunting
I don't think any of the Lapwings have got chicks yet, as I had two displaying birds and a further six loafers. No agitated, alarm calling adults. They had started to nest on the stubble fields, and then these were ploughed, tilled and sowed with either oats or potatoes, so I any early nesting attempts would have been wiped out, and they would have started again. So, a week or two yet before any chicks at this site.
At the weekend Alice, Gail and I were back at our two nest box sites in the Hodder Valley in Bowland and on Robert and Diana's farm on the fringe of the Fylde, near Garstang. 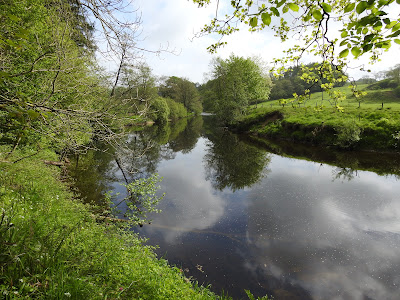 The River Hodder
We did a full check of the boxes at each site, and it is looking rather worrying for our Pied Flycatchers, with just five occupied boxes. However, there is a chance that another pair or two could have started during the intervening time, and this would then be about average occupation rate for this site. 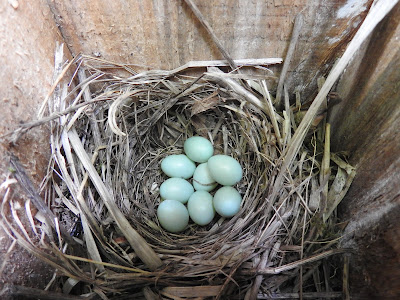 Pied Flycatcher nest
Amazingly, we found a further two boxes with Pipistrelle sp. bats in! Nearly as many Pips as Pied Flys! 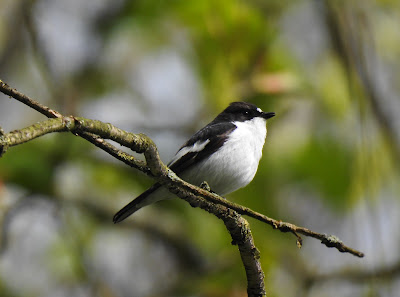 Male Pied Flycatcher
We then went to Robert and Diana's farm to check our boxes there. When we arrived, Robert informed us that he had found two broods of Blackbirds in some of his out-buildings, and two broods of three were duly ringed. One brood was ahead of the other brood by a few days. 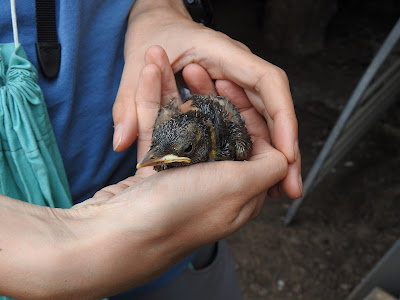 Blackbird
In the boxes we ringed three broods of Tree Sparrows; 4, 6 and 5 respectively. The remaining two broods of Tree Sparrows should be ready to ring next weekend, as should some of the Blue and Great Tits. I'm looking forward to that.
I've had more BBS to do this past week, including a site in Greater Manchester. This site looks to be on former open cast coal workings, and is now a lovely area of semi-mature woodland, with some more open scrubby areas. It's certainly a good area for Song Thrushes and I had six singing during my survey. Warblers were in fine voice too, with four Willow Warblers, four Blackcaps, three Whitethroats and four Chiffchaffs.
In fact, I did three breeding bird surveys this week, and the second was on a farm in the Fylde, near Wrea Green. There were two Lesser Whitethroats singing on site, and from a distance you can hear their distinctive 'rattle' of a song, that sounds like nothing else. Before the 'rattle', it is preceded by a scratchy warble, which you can only hear when you are close. It is not often that I hear this bit of the song, but this morning I was close enough to one of the birds to hear it.
Tree Sparrows were very obvious this morning, and I had at least four juveniles, and a further 13 birds that I either heard just calling, or they flew over calling. Not a bad total. A singing Yellowhammer was noteworthy, and it's a sign of the times when a single singing yellowhammer is noteworthy!
As always, I encountered some Brown Hares, and this site isn't the best of the sites for Brown Hares that I am surveying at the moment, but it's always a pleasure to encounter any Brown Hares, and on this morning, it was five. One was fairly close on an arable field margin, and I managed a half decent snap or two. Well, at least I think so. 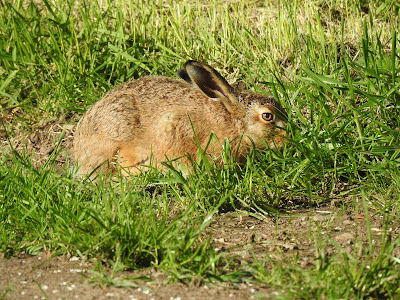 Brown Hare (above & below) 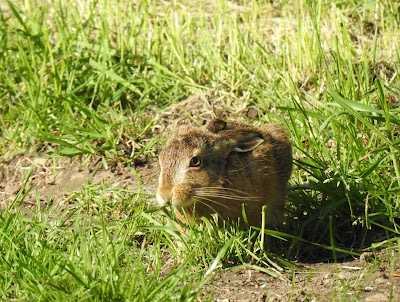 My third and final BBS of the week was yesterday, another arable farm, and I recorded thirteen Brown Hares here. The wind was a bit gusty from the southwest, and I think this had a bit of a dampening effect on bird song.
I don't often hear Tufted Ducks calling, but on this site, I have heard them calling several times around the fishing lake. This morning there was a female flying round, pursued by either just one, or two males, and the female was calling constantly. I assume that it is part of courtship etc., but I must look it up.
Sedge Warblers are great mimics, and I have heard them including lots of snippets of other species song/calls within their own song. This morning a Sedge Warblers singing along the dyke was throwing Reed Bunting call into his song, and of course there are a few pairs of Reed Bunts along the dyke!
A Great Spotted Woodpecker flying across a large arable field looked a bit odd, and I can only assume that it was on a foraging trip to provision young in the nest.
It's boxes again at weekend, and another week of breeding bird surveys. As always, I'll keep you posted.