My breeding bird survey work is slowing down now, and I only have five surveys left to do before the end of the month. I was out doing a survey yesterday fairly locally, on an area of pastoral farmland, with a network of hedges, ditches and ponds. It was a glorious morning, but it was a tad windy, not too windy for the survey, but approaching the top end of what is tolerable for a BBS.
It's a good deal quieter at this time of year as most bird species are either feeding young, or have fledged their first broods and are on with their second. Trying to pick some highlights from my maps is difficult, but worth a mention were the five Whitethroats, 23 Magpies (!), two Chiffchaffs, two Reed Buntings, two Blackcaps and two Sedge Warblers, the majority of which were singing males.
I particularly enjoyed listening to and watching a male Sedge Warbler singing away from a dried Willowherb stem that was swaying in the wind, and it looked like the Sedge was riding a 'bucking bronco'! Whilst this bird was singing its heart out, I could clearly see the reddish-orange colouration inside the bill, and I always love this. As Sedge Warblers often do, it was doing a bit of mimicry, and it was including snatches of Linnet and Pied Wagtail calls within its own song. Fantastic.
The highlight of the past few days was ringing some Kestrel chicks this morning at Robert and Diana's farm near Garstang. We have a box up in the woodland on the farm, and for a number of years now it has been occupied by Kestrels. We knew there were five chicks as we checked them last weekend and they were too small to ring, but this morning when Gail, Alice, Sally, Robert and I checked them again, they were a perfect size. Five healthy Kestrel chicks were duly ringed, and all we can do now is hope that the parents manage to bring enough food in, and they fledge successfully. Fingers crossed! 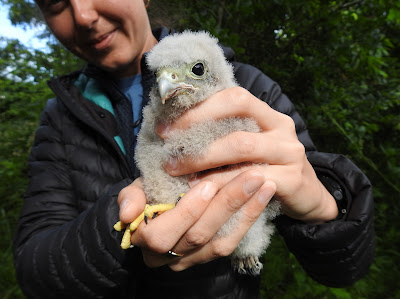