A nest box with camera is a great way of monitoring birds so as not to disturb the family unnecessarily until the time comes to ring the youngsters. The images of 31 May and then 8 June from Jamie’s camera documented the Kestrel’s progress so well that we were able to set the date for ringing the chicks as Monday 13 June. I met Andy on site at 1000 where we borrowed Steve’s ladder to investigate. 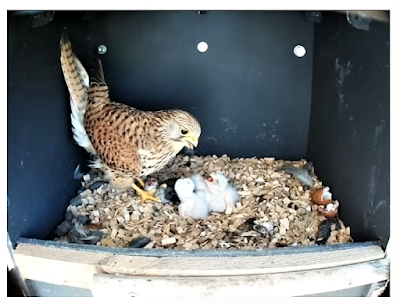 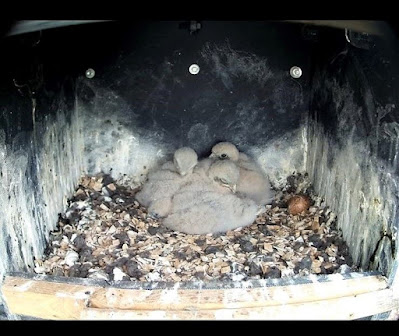 Kestrels - 8 June
We expected to find three chicks but were happy no see four young and feisty Kestrels at an ideal stage to accept their new rings. 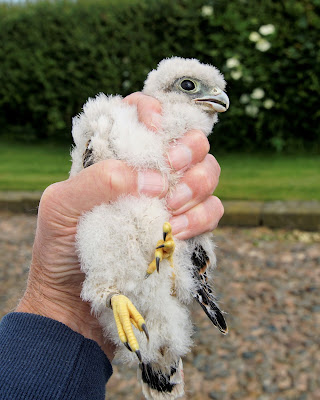 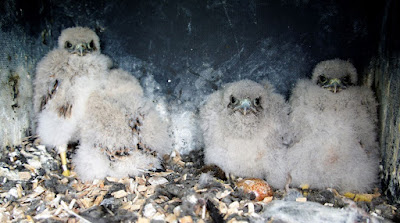 Kestrels - 13 June
Ten minutes after ringing both adult Kestrels returned with animal food for the chicks. The same site has breeding Barn Owls and Kestrels together with Little Owls nearby, a variety of predators that points to a healthy population of voles, mice, rats and small birds in the adjacent and sympathetically farmed land.
You can follow the progress of this Kestrel family on Jamie’s live nest box streams at https://www.facebook.com/NestBoxLive. There are birds from all over the world including Tree Sparrows, Swifts, Bluebirds plus owls and raptors alike. Be warned, the site is very addictive!
Our visit was also timed to check the Barn Owl box that had not sent images for weeks. Andy climbed the ladder because he’s the youngest but not by much. He reported the camera lens buried in debris from many meals and their aftermath and advised the camera be cleaned and placed higher once the owls had finished. Of the four young Barn Owls just three were big enough to ring. 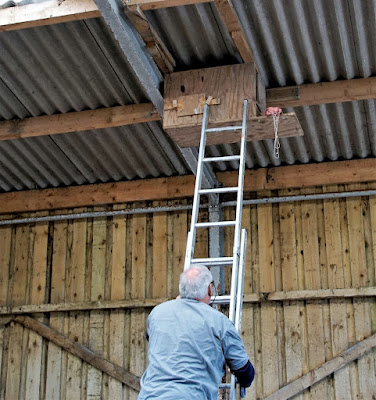 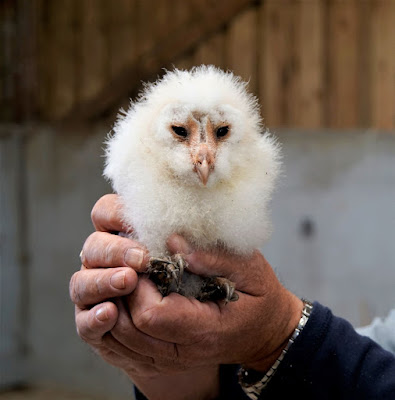 Barn Owl
Barn Owls lay 4-6 eggs but not all eggs hatch though 4 is the average as some may be infertile. Most bird species don’t start to incubate (sit on and warm) their eggs until the clutch is complete, so the eggs hatch at more or less the same time.
Barn Owls begin incubation as soon as the first egg is laid and lay additional eggs over a period of around 8-21 days. After 31-32 days’ incubation, the eggs hatch every 2-3 days, usually in the order they were laid. This is known as “asynchronous” hatching. The age difference between the oldest and youngest nestlings can be as much as three weeks. This age variation serves to reduce the peak in food demand and spread it over a longer period.
Today’s smallest chick will remain un-ringed because if we were to return to ring that one there is a real risk that its larger siblings might leave the box prematurely and thus be in danger in an outside world that they are not quite ready to enter.
Back home three young Dunnocks (from 5 eggs) were old enough to be ringed and their details recorded on the BTO database, each with their personal ring number, the place of birth, their approximate age and the number of siblings in the family. 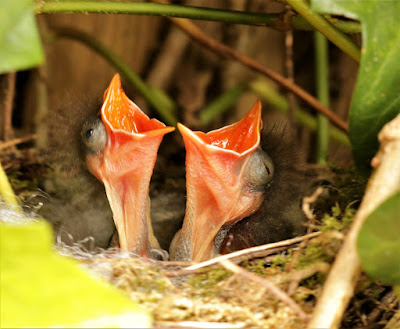 Dunnock chicks
Back soon with more birds, news and pictures on Another Bird Blog.