Thursday - what a strange morning. We met at 0600 up at Oakenclough - Andy, Bryan and me - a sunny morning in mid-June when we might expect good numbers of both breeding adults and newly fledged juveniles.
However, and against all expectations our catch of birds in four hours totalled a paltry twelve - 2 Willow Warbler, 2 Bullfinch, 2 Robin, 2 Blackcap, 1 Goldfinch, 2 Wren and 1 Dunnock. Only three of those twelve birds, the resident Robins and the single Dunnock, were juveniles of this year.
A surprising aspect of the morning was the lack of juvenile Willow Warblers as opposed to the fifteen or so males still in full song in the planation. Spring 2022 was so cold, late and lacking in the timely arrival of both males and females that we suspect many Willow Warblers are still at the nesting/incubation stage where males sing while females attend to their nest. Alternatively there may be many nest failures but either way is bad news.
Female Bullfinch AKN3608 was a recapture from the last visit while the male was new to us. Both were in prime breeding condition that suggested a nearby nest. 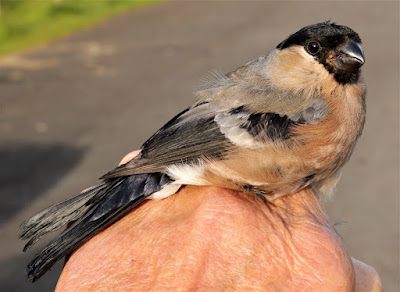 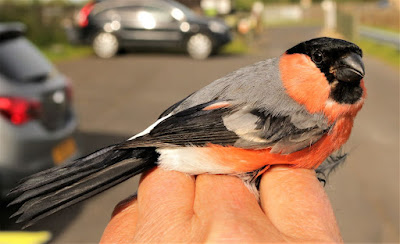 Bullfinch
Both Blackcaps were male but we saw no females or newly fledged young. 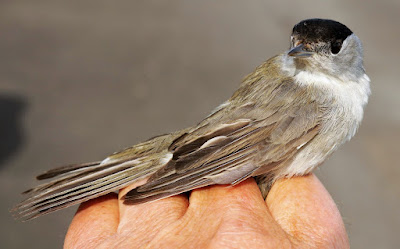 Blackcap
The two juvenile Robins were offspring of resident birds rather than summer returning warbler species. 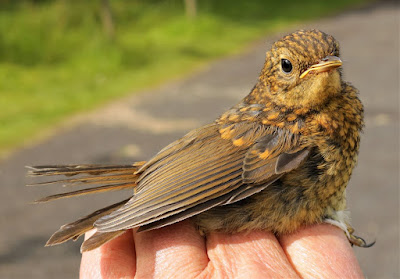 Robin
On the water and along the grassy banks we saw an unseasonal Whooper Swan, one that by rights should now be in Iceland. 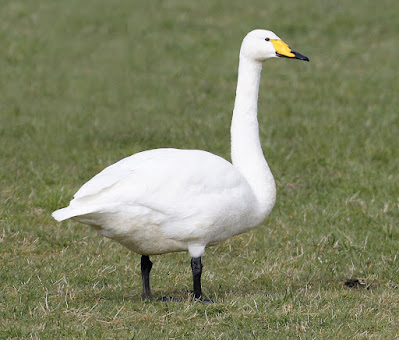 Whooper Swan
Quite why and how a Whooper Swan is up in the hills of Lancashire in mid-June is something of a mystery, but it could be the same one that summered in the Cockerham area 15 miles away in 2021 but then joined Greylags returning inland to breed. During the northerly winds and cold of May 2022 the Whooper probably felt quite at home.
A single Buzzard soared around for a while before performing a display dive to distant trees. 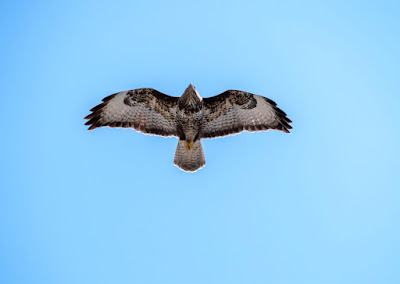 Buzzard
Buzzards are now scarce up here on the edge of Bowland where raptors must still take their chances against tech-savvy gamekeepers. In contrast to this certain and continued persecution there is informed talk of a very successful breeding season for both Hen Harriers (40+ young fledged) and Merlins on private land where the species are well watched and soundly protected.
From nearby trees, mixed and conifer, we saw Siskin, Nuthatch, Great-spotted Woodpecker and a party of 15-20 Long-tailed Tit. Thankfully, and for the second time on the trot we retained a clean sheet for the timice family. By all accounts it would seem that they too have experienced a poor season due to a lack of caterpillar food in April and May. Our pet name for Oakenclough is "Coal Tit Central", but not on Thursday. 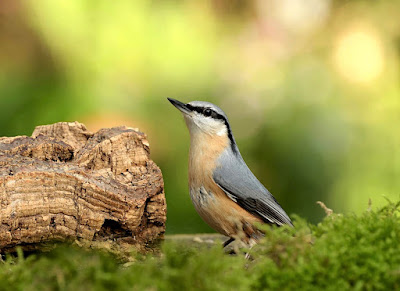 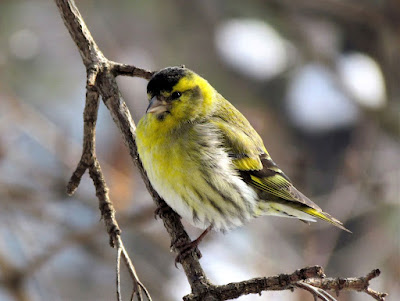 Back soon with more news, views and photos.