Last week found me at two of my breeding bird survey sites, the penultimate visit for the first site, and the final visit for the second.
My first visit (Wednesday) was local, and I have blogged about it many times, and is in the main a large block of arable farmland. It was a 4:45 a.m. start under clear skies, with a light north-westerly wind. There was a heavy dew, and it was heavy enough to cause a dew in my beard, something that always feels a bit strange! Some of the low-lying parts of the site were enveloped in mist, but as soon as the sun made an appearance, the low-lying mist soon disappeared. After that, it was a gloriously warm and sunny morning. 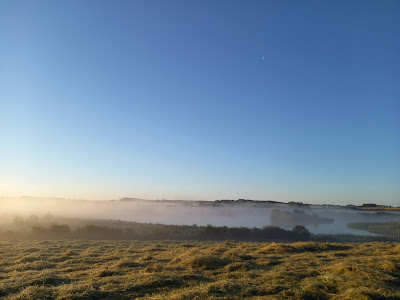 Misty hollow
Brown Hares were noticeable, and I counted about ten on my walk round. The low-lying mist meant that I couldn't see properly onto the fishing lake, so eight juvenile Greylag Geese, three Gadwalls and three Mallards isn't representative of what was on there at all. 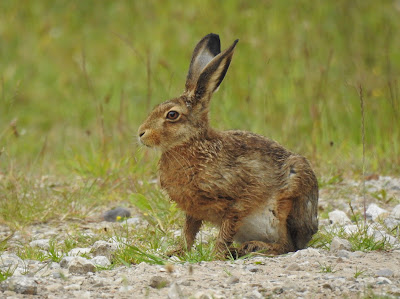 Brown Hare
Swifts were present, carving the thick, warm air, with their scythe-like wings as they flew low, hawking for insects, and twelve were sortieing back and forth. Swifts weren't the only species on the hunt, as I had a Barn Owl early on, quartering the grassland along the edge of some woodland.
The dawn chorus is less of a noisy affair by this time of year, and players in the dawn chorus orchestra, in full song, included nine Skylarks, two Willow Warblers (where have all the Willow Warblers gone this year?), a Chiffchaff, eight Sedge Warblers, two Reed Warblers (Sedge and Reed making up the 'metal' element of the orchestra), a Blackcap, six Whitethroats and five Reed Buntings. 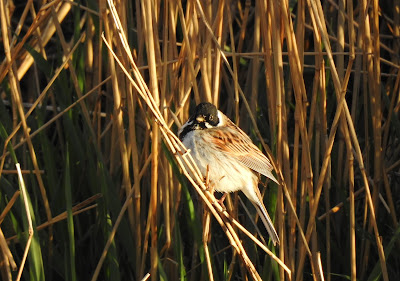 Reed Bunting
The prize for the most unusual sighting goes to a Yellow Wagtail that I had fly over. I heard a Yellow Wagtail calling, looked up, and got my bins on it as it flew over a crop of Oats, before dropping into the oats close to a pond. It was very probably visiting the nest. Yellow Wags are scarce breeders now in Lancs, but this block of arable land that I was surveying is large, with a mix of crops (Winter Wheat, spring Oats, spring Barley and Potatoes), and no public access, so a Yellow Wag here could nest without any attention from birders/naturalists, and it would seem that it has!
On Friday, Gail and I were up in the northeast near Teesside carrying out the final BBS visit to a site there. It was another pleasant day, although a little cooler, with 6 oktas cloud cover, and a light south-westerly wind.
Although it was a BBS that we were completing, we couldn't help but record the butterflies and day flying moths that we came across. In total we had the following lepidoptera:
Wall - 2
Meadow Brown - 9
Grayling - 14
Ringlet - 3
Cinnabar - 3 (lots of caterpillars though)
Five-spot Burnet - 2 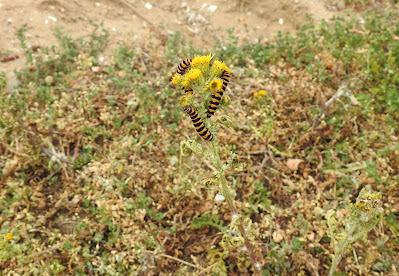 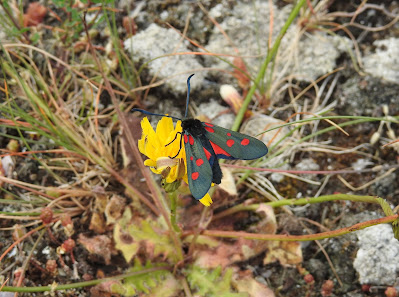 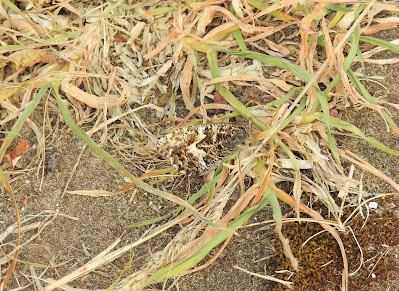 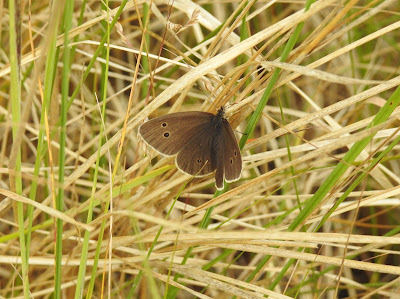 The biggest surprise of the survey bird-wise was a cracking adult summer plumaged Mediterranean Gull amongst the 14 Black-headed Gulls. The site is very sandy, and is Rabbit grazed, and consequently there is quite a lot of bare sand and short vegetation, all good for inverts, and this is what the Gulls were feeding on. I only managed a very dodgy record shot, as you can see below, but you can tell what it is! 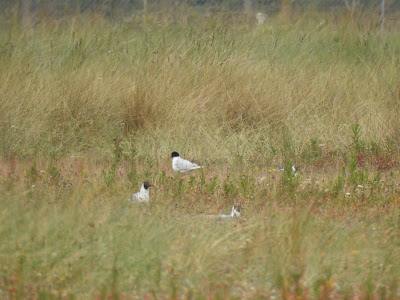 Med. Gull - honest!
Just two species of raptor; a Buzzard and a female Sparrowhawk carrying prey, and being mobbed by eight Swallows. Three Skylarks were singing and 14 Meadow Pipits were feeding in the sparse scrub and grassland, as were six Linnets. 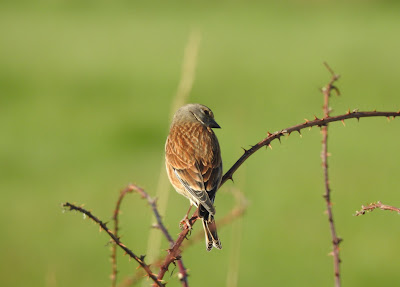 Linnet
On Sunday, Alice, John and I carried out some wader monitoring at a farm in Bowland where I manage the conservation interests. When we arrived at 6:00 a.m. we couldn't quite believe how cold it was, and had to get togged up in coats with a few layers. Is it really June?
We had at least four pairs of Curlews alarm calling on the part of the farm that we were surveying, and 'eagle-eyed' John spotted a pair with two chicks. We managed to pick up one chick and ring it, but the other successfully disappeared into the tall meadow grass. What was interesting, was that my thermal imager was struggling to penetrate the tall grass, so the grass obviously has pretty good thermal properties. 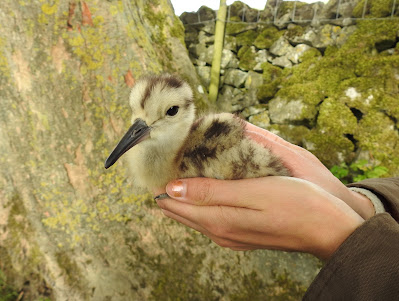 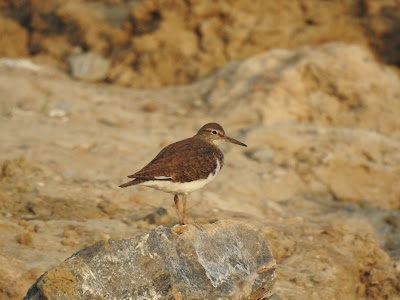 Common Sandpiper
Odd Lesser Redpolls were moving around calling, and Linnets are obviously starting to flock as we had a group of 20. Raptors were represented by a Buzzard and a Sparrowhawk, and only two singing Willow Warblers continues the worrying picture for this species.
It's looking showery for the next few days, so I'm not sure when or where I'll be out, but I should have news on some Barn Owls later in the week.