After the windswept week it was Friday before our second visit of the season to the small House Martin colony near the village of Dunsop Bridge, Forest of Bowland. The last visit here was 7 June 2022 when we caught 11 adult House Martins, the objective today being to catch more adults together with juveniles of the year.
Andy picked me up at 0600 in his mobile ringing office and me met up with Will about 55 minutes later at the low office building that sits alongside the River Dunsop.
"Click the pics for full size images."
The great majority of House Martins build their nests under the eaves of houses, (and other low buildings, as here in Bowland) but a few colonies can still be found on cliffs. The famous Malham Cove just over the hills into the White Rose county of Yorkshire and about 20 miles away from Dunsop is one such example - or it was the last time I was there several years ago. With the population decline of House Martins I suspect that the species has gone from that site, as it has from so many others. 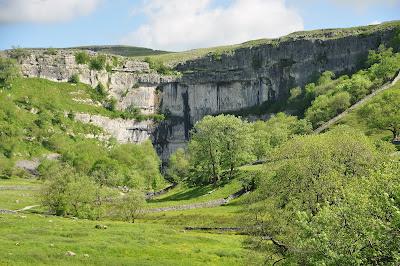 Malham Cove, Yorkshire
The House Martin is one of the most widespread birds in Europe, occurring from the Mediterranean all the way north to the Arctic. They are rare breeders in Iceland. Though almost all Europe’s House Martins go a long way south for the winter, a few remain in southern Spain and Portugal throughout the year.
It is possible to attract new House Martin colonies by erecting boxes in suitable sites (as here), but beware House Sparrows will often take over martin nests, frequently ousting the rightful owners.
Around 86% of House Martins nesting in Britain attempt to rear two broods. Though the same pair will usually remain together for a single breeding season, it is rare for the two to pair again the following year, even if both survive. A House Martin diet is almost exclusively flying insects, caught on the wing. House Martins typically feed at a higher altitude than Swallows, so the two species do not compete with each other. The House Martin’s furry legs of tiny feathers are thought to be an adaptation to protect the birds from the cooler air of higher altitudes. 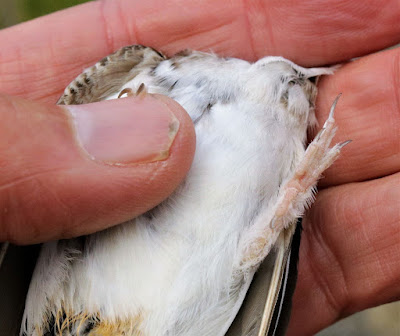 House Martin
We’d set off from the coast into Friday morning into a fine morning with zero wind. Upon arrival at the upland site we were greeted by low cloud with a cool, stiff and sometimes swirling wind around the building. Such conditions are far from ideal in which to catch keen-eyed martins but after the long drive we persevered.
Five birds caught, 2 adult House Martins recaptured from 7 June, 2 new adult House Martins and a Pied Wagtail. Rather surprisingly we caught no juvenile House Martins of the year, although it soon became clear that adults going under the eaves were in the process of feeding youngsters still in the nest. 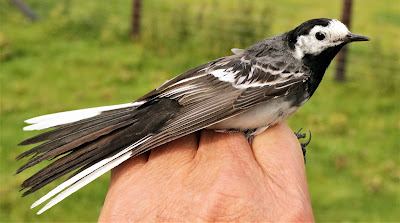 Pied Wagtail
We’ll leave it for a week or two then try to find an ideal weather morning when we hope to see more House Martins on the wing.
This morning saw a selection of raptors in Kestrel, Sparrowhawk, Merlin and Buzzard.
Into the stiff headwind a Common Buzzard soared around as normal but also “hovered, much like a Kestrel does. It’s relatively uncommon to see Common Buzzards perform this type of hover, and it rarely lasts for more than a few seconds at a time, unlike a Kestrel that can be stationary in the air for minutes at a time. The most likely time to see a Buzzard 'hovering' is when there's a headwind that they can use that makes them appear fixed or barely moving in the air.  It seems that some individuals develop more of a habit of doing it than others. 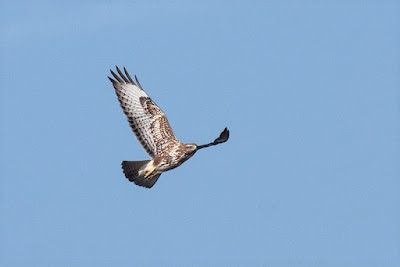 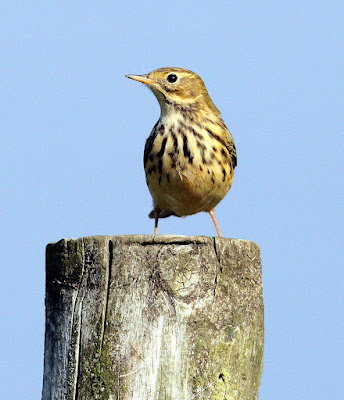 Meadow Pipit
Linking this weekend to  Eileen's Blogspot.
I think next week will see an improvement in the weather and more visits to the Great Outdoors.
Log in then to see news, views and photos from Another Bird Blog.