Monday at Pilling proved fairly unproductive with yet another catch that barely reached double figures. There was a lack of warblers but a noticeable increase in the flocking behaviour of Linnets. It appears that Linnets have done OK, but for warblers the season has been less productive with post breeding dispersal＊yet to kick-off.
Eleven birds caught - 4 Linnet, 2 Robin, 2 Reed Warbler, 2 Blackbird, 1 Sedge Warbler.
Adult male Linnets quickly lose their bright red colours and in a few weeks will look almost completely different after their post-breeding moult. 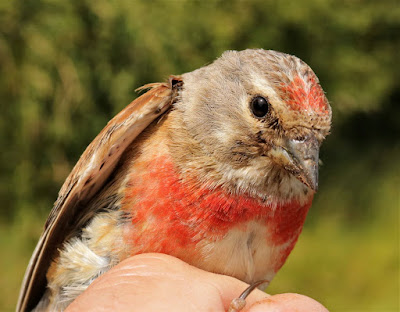 Linnet
The two Reed Warblers were recaptures from 19 May 2022 and from August 2021; quite remarkably for mid-July of any years gone by it meant that we had yet to catch a juvenile of the year. 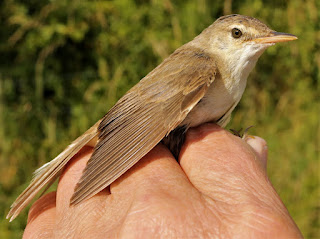 Reed Warbler
＊Post breeding dispersal. When juvenile birds from the last brood have successfully fledged they are no longer dependent upon their parents for feeding and training and it is common for be adults and juveniles to disperse. They are no longer tied down to the nest site when the rearing of young is over. Adults don’t need to defend their territory anymore and begin to wander further afield in search of food while youngsters head off to discover the big wide world away from their birth place.
The week continued warm but windy from the north and it was Saturday before any morning looked suitable for another go so I met Will at 0615. The forecast of 5mph proved partly accurate as the wind increased to 10 and then 15 mph with full cloud cover by 10 o’clock and no sign of the overhyped heatwave.
We hit a morning of minor dispersal with a handful of warblers newly arrived from elsewhere and definitely not from our site.
Ten birds caught - 2 Chiffchaff, 2 Sedge Warbler, 1 Willow Warbler, 1 Lesser Whitethroat, 1 Blackcap, 1 Goldfinch, 1 Linnet and 1 Great Tit. Once again, no new Reed Warblers in our catch report although a few adults still sing away. It could be that all the nests of June and July have failed.
The Lesser Whitethroat was an adult in partial moult, the rest of the warblers being birds of the year. 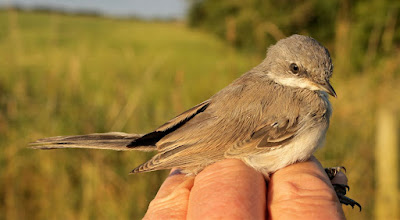 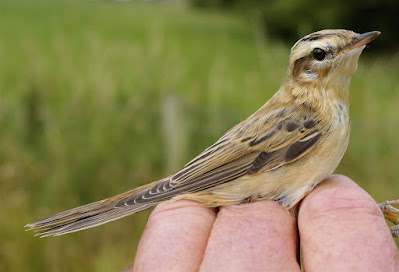 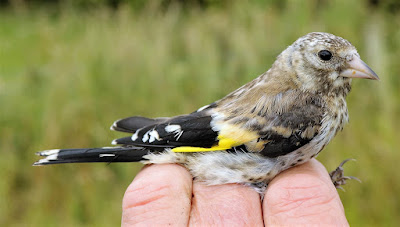 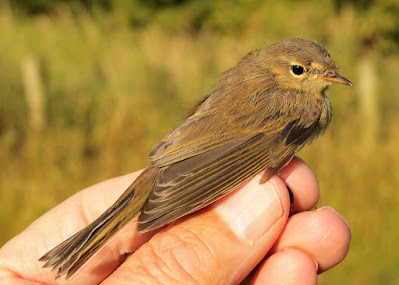 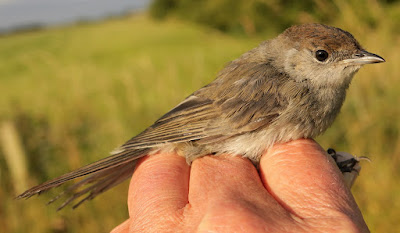 Blackcap
The ever increasing breeze put paid to plans to catch Linnets as the net became visible to the ever wary finches. Throughout the morning we estimated 50/70 Linnets visiting the area but only one caught.
Other birding entertainment was provided by a pair of juvenile Peregrines twice hunting a pack of Starlings It was the rush of sound from the wings of tightly packed Starlings that alerted us to the pursuing raptors presence.
Others - 1 Kestrel, 1 Raven, 4 Swallow, 2 Swift, 2 Little Egret, 1 Grey Heron.
Linking this weekend to Eileen's Blogspot and Anni in Texas.