Staying home and keeping cool for a couple of days during the heat wave, and since the cooldown no opportunities for any freedom, has given me the opportunity to collate a selection of the second quarter of this years Stonechat records - 100+in total April-June - collected in the main from FBC sightings page.

The records have shown a surprising number of lowland birds, with the Lancashire Bird Report 2020 claiming Stonechats to be fairly widespread in coastal areas.

* Stonechats at Conder Green and Heysham Head in May/June are extraordinary, in particular the Conder Green bird. According to my records, there's never been a Stonechat seen here during the breeding season, and almost certainly never at Heysham Head on 17 June.

My Stonechat'ing days and where I go are much restricted now, so nothing comprehensive here, but....

* No evidence, but probably breeding

Since the recent pollution incident which had serious consequences for wildlife, including dead otters and fish, it was rewarding to find the canal at Garstang appears to be reaching some normality again. It was pleasing to find 4 Brown Hawker and 2 Emperor Dragonfly as evidence that it seems no harm had come to the Odonata of this affected section of the canal.

It was good to find two firsts for the garden, when a Small Skipper and Meadow Brown put in an appearance recently, also nice to see Holly Blue and Comma.

I've used the word paucity a couple of times recently to describe my butterfly records recently. I'm claiming no more than 40 have been seen in our butterfly and bee friendly garden since the beginning of summer. This reflects the disaster that might be around the corner, that half of Britain's butterfly species are listed as Threatened or Near Threatened on a new Red List. 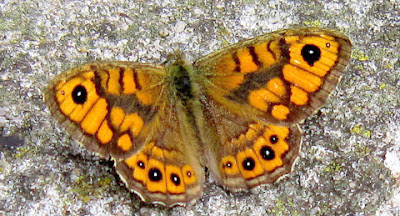 It's 5 years since I saw my last Wall Brown, it was seen along the coastal path at Cockers Dyke in August 2017.

The 22cm Tree Wasp Dolichovespula sylvestris was munching at the wood on the boardwalk fencing at Birk Bank to digest as paper for nest building. 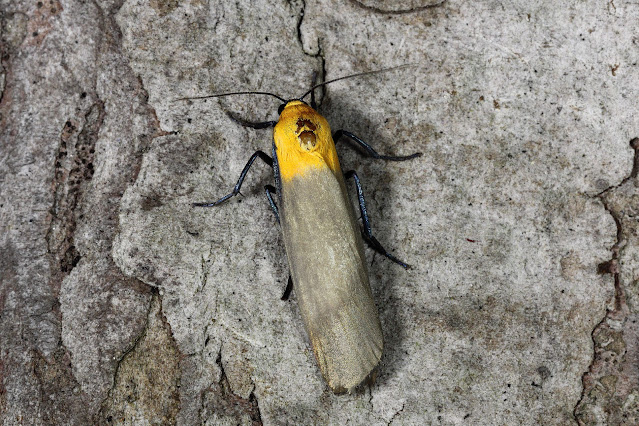 The Four Spotted Footman featured in my header and above, is thanks to Ian who found it in his trap on Monday. It is a sexually dimorphic moth, only females have the spots which gives the species its name. They are more likely to be found in central and southern Europe, though they are resident along the south-west coast of England and parts of Wales, making Ian's individual a scarce immigrant found in the north of England....I've not yet found out what the disfigurement is on the moth.

I've seen a couple of moths recently, nothing unusual but worth noting. 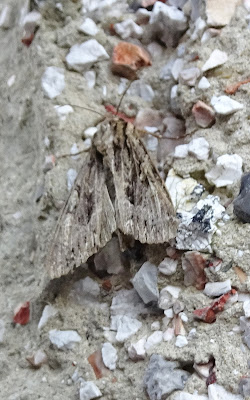 Dark Arches. Pete Woodruff.
The Dark Arches came to rest on the pebbledash on our house.... 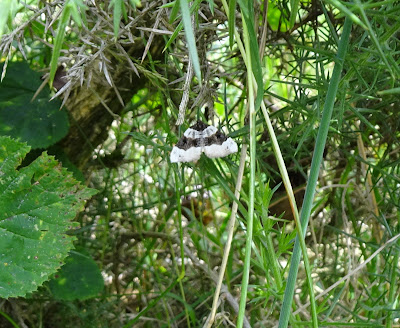 Purple Bar. Pete Woodruff.
And the Purple Bar was hiding in the undergrowth at Grisedale Bridge.