Yesterday, Alice, John and I had a ringing session at the Nature Park, and we managed to ring just the second ever Treecreeper for the site. Treecreepers are scarce on the Fleetwood peninsula, and to put this in perspective, we have ringed more Kingfishers, Bearded Tits, Cetti's Warblers and Grasshopper Warblers on site, and from a Fleetwood Bird Observatory recording area perspective, we have ringed more Ringed Plovers, Lapwings, Jack Snipes, Snipes, Turnstones, Swifts, Skylarks, House Martins, Yellow-browed Warblers, Stonechats, Yellow Wagtails, Tree Pipits and Mealy Redpolls, than we have Treecreepers. So, as you can see, they're scarce! 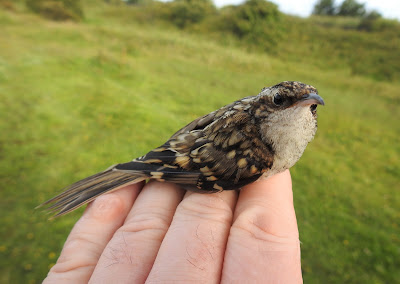 Treecreeper
As you can imagine then, this green-listed, resident breeder of broad-leaved woodland, caused quite a lot of excitement between the three of us! However, it was a fairly quiet ringing session otherwise, and we ringed just 15 birds as follows:
Wren - 1
Long-tailed Tit - 4
Chiffchaff - 1
Treecreeper - 1
Reed Warbler - 2
Lesser Whitethroat - 1
Cetti's Warbler - 1
Sedge Warbler - 1
Robin - 1
Willow Warbler - 2 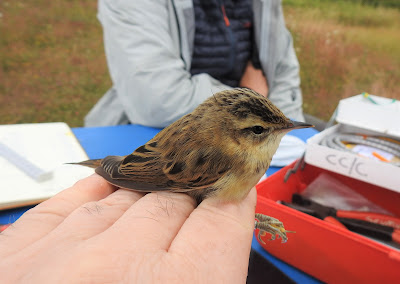 Sedge Warbler
Sadly, we didn't recapture any birds, as it is the recaptures that provide us the information on survival and longevity.
The birding was equally as unspectacular, and I am only going to mention the Little Egret that flew over, because as I have mentioned umpteen times before, that they still give me a buzz being a birder of a certain age!
I forgot to mention previously, that a couple of months ago we were notified by the British Trust for Ornithology (BTO), that a ringed female Pied Flycatcher that we lifted off the nest in one of our boxes in the Hodder Valley, that wasn't one of our birds, had come from Bearda in Staffordshire. She was ringed as a chick, from a brood of 6, in a nest box in some mixed broadleaved and coniferous woodland, on 8th June 2020. This is a very powerful piece of conservation data, as we know exactly where she was hatched, more or less exactly how old she is, and we now know where she is breeding, which is 86 km NNW of where she was hatched. See Google Earth image below. 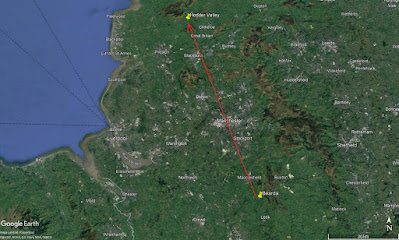 (Click to enlarge)
The weather forecast is looking good for later in the week, so hopefully from Tuesday onwards I'll be out. I'll keep you posted.