Readers will be pleased to know I survived the two day “heatwave” that only last week was projected to “kill thousands”. This is all very confusing because five or six years ago scientists predicted that “Earth is 15 years away from a mini ice age" when we would all freeze to death.
For those of a nervous disposition likely to be triggered by the daily diet of doom and gloom served up by TV and newspapers, it’s best not to worry about latest scam. Just like buses, you can bet there’ll be another one along very soon.
Instead, take a seat, relax, put the kettle on and contemplate the next birding day. 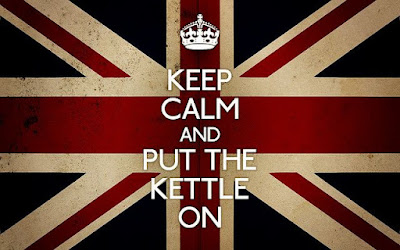 Keep Calm
This preoccupation with weather watching does occasionally make for the wrong decision, as we may have for Thursday when at the last minute we cancelled Thursday in favour of ringing on Friday.
Friday dawned but there was no point in fretting what may have been but instead concentrate on the job in hand at our ringing site out Pilling way. It was 0615 when Andy’s car negotiated the rough track, where in my inability to sleep at the prospect of a ringing session, I had already set the Linnet net.
With mid-week reports of early migrants including Yellow Wagtails, Whitethroats, large roosts of Sand Martins plus returning waders like Ruff and Greenshank, anything was on the cards in the slight, almost non-existent easterly draft.
An hour or two later we had our answer when cloud rolled in, the breeze sprung up and drizzly rain enveloped us. This proved very frustrating as by then we had caught just seven birds, two each of Reed Warbler, Sedge Warbler and Linnet plus a single Wren. We saw 60/70 Linnets head our way and stop for a look as the single panel net grew increasingly balloon-like; there was no way the Linnets would fall for that. 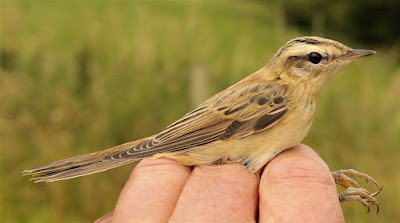 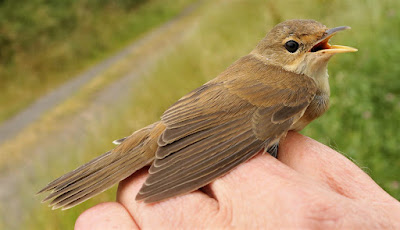 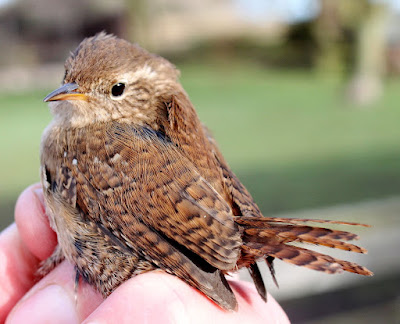 Wren
A Wren or “wrigglearse” as ringers fondly name them, has a reputation as a tiny, troublesome beast, one that will wind itself into a mist net several times over or run up an unwary ringer’s open sleeved jacket. Twisty turning fidgeting Wrens are the best learning experience for a trainee ringer in how to handle small birds, lessons they never forget.
However, Troglodytes troglodytes the cave dweller is an in interesting species and certainly more migratory than many bird watchers realise, hence the reason we catch the species.
Click on the map below taken from the BTO’s phenomenal online migration atlas.

Eurasian Wren from -  https://migrationatlas.org/node/1822 map
We’ve hit a Wren sweet spot because today we caught another two Wrens plus 2 Sedge Warbler, 2 Linnet, a Willow Warbler, a Greenfinch and the ultimate rarity, a Song Thrush. 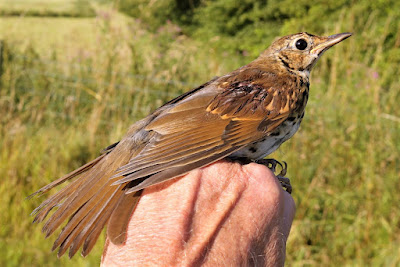 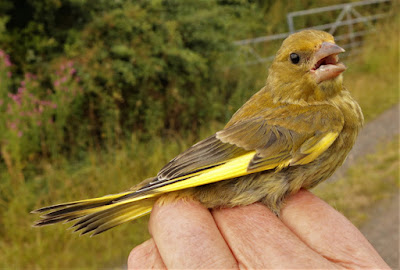 Greenfinch
We packed in early when contractors arrived to turn the cut grass in readiness for silage stage. The noise and disturbance from the huge machines made ringing almost impossible. 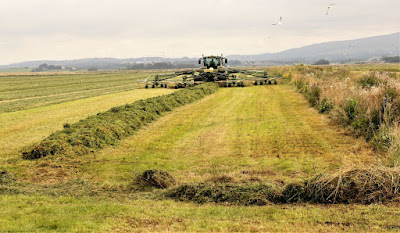 On The Farm
We saw our first autumn Marsh Harrier when a brown juvenile followed the species’ usual route north to south and then disappeared into the distance. 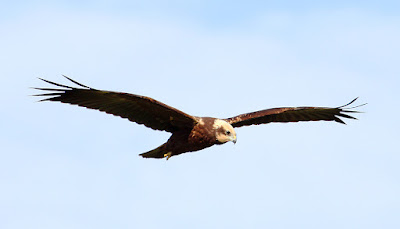 Marsh Harrier
Also, 2 Little Egret, 1 Kestrel, 60+ Linnet, 40 Lapwing, 30 Curlew, 300 Starling, 1 Great-spotted Woodpecker, 4 Pied Wagtails.
I was home early so clicked the kettle on and dropped a tea bag into a favourite mug. Life is sweet when there’s nothing to worry about.
There’s more news, views and photos soon from Another Bird Blog.