“Six-fifteen?” We agreed. It seemed like a good idea at the time until the alarm buzzed at five-fifteen when I went through the well-practiced routine of ablutions, clothes, breakfast and a flask of coffee for the day ahead. Minutes later I hit the road to Oakenclough and met Andy on the dot to a cloudy start and a light south-easterly.
We heard the soft piping calls of a Bullfinch near to the first mist net and thought it highly likely we would catch a Bullfinch or two now that the species has returned to the site. Better still, a few recently fledged youngsters.
Within minutes of our arrival there was shower that lasted three or four minutes after which it remained dry until we left at 1115. It had been a while since our last visit here of 17 June Another Bird Blog when we had questioned the lack of newly fledged birds.
Throughout the rest of June and through July we thought that with the exception of Sand Martins and probably Linnets, the breeding success of all species had been both late and/or poor.
The next few hours might give more clues and develop a few theories. We finished with a better catch of 25 birds, 24 new and one recapture, an adult Bullfinch first ringed on 17 June. The only other adult caught was a male Goldcrest.
The remaining 23 captures were all shown to be juvenile/first summer individuals, and thirteen of those Willow Warblers. We were seeing juveniles in larger numbers and in more species for the very first time this year, all to confirm our suspicions of a late breeding season here in the cool of North West England.
In total - 13 Willow Warbler, 6 Blue Tit, 1 Chiffchaff, 1 Goldcrest, 1 Lesser Redpoll, 1 Blackbird, 1 Great Tit, 1 Bullfinch.
The single juvenile Lesser Redpoll was a very young bird yet to begin any post juvenile moult or develop reddish tinges. We were sure it was part of a brood born quite close to the site. 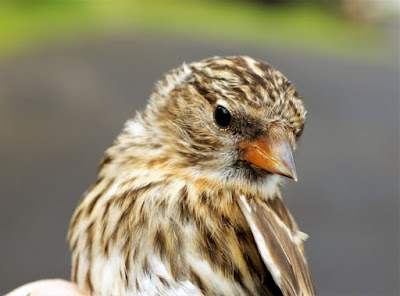 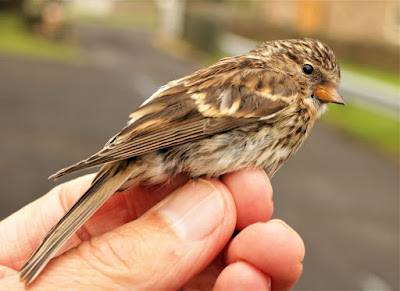 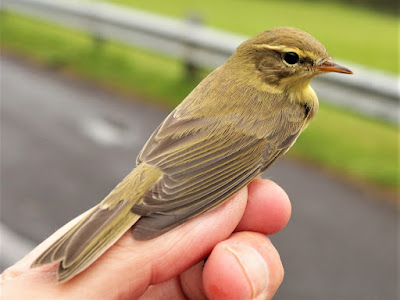 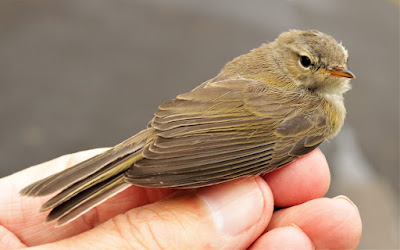 Chiffchaff
A gentle blow of the crown feathers of the partly moulting “female” Goldcrest showed remnants of a male’s orange feathers.  A male quite quickly loses those orange centres used to attract a female at the start of the breeding season. 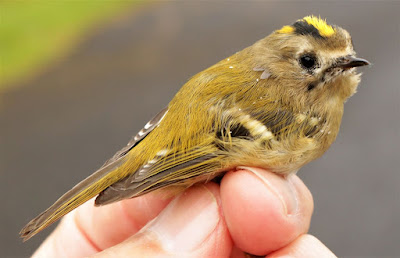 Goldcrest
The male Bullfinch remains in good breeding condition. It displayed an obvious incubation patch and a cloacal protuberance, plus that we did not catch the female suggest the pair may have a second clutch of eggs somewhere in the dense woodland. Like many species, the male Bullfinch does his share of incubating eggs, hence the need for a bare, warm belly. 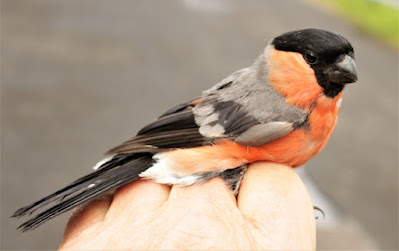 Bullfinch
Birding between bouts of ringing/processing produced the surprise sighting of a fly-by Kingfisher, only the second one ever seen here.  Also, 4 Pied Wagtails, a handful of Swallows, a Great-spotted Woodpecker and a couple of Chaffinches.
As is often the case it’s the species not seen, caught or even heard caught that provoke the questions. Today it was “Where are the Blackcaps, the Whitethroats and the Garden Warblers”. Or, “Why only four or five Swallows and no Swifts?”
And there’s always the perpetual one, “Why no Buzzards, on this fine morning for a circling raptor?” Well I think we all know the answer to that last one, especially when we noted young pheasants on the loose.
Linking this weekend to Eileen's Blogspot and Anni in Texas.