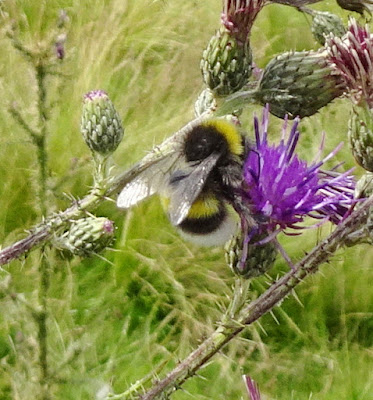 I'm walking along the grit track on Hawthornthwaite Fell and finding lots of White-tailed Bumblebee on Thistle. 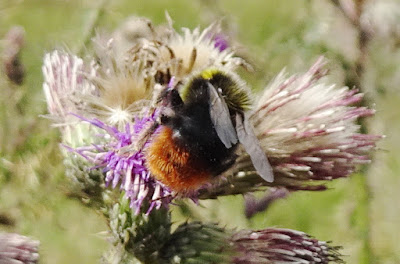 Bombus lapidarius Hawthornthwaite Fell.  Pete Woodruff.
But hang on, this one has a red tail, and for about five seconds I'm thinking, bloody hell have I found my first Bilberry Bumblebee....Well no, 'cos this is a Red-tailed Bumblebee, known to be essentially a lowland species, with a few records in upland areas, and possibly none on moorland. Well....looks like I found something of a scarcity in them thar'ills. 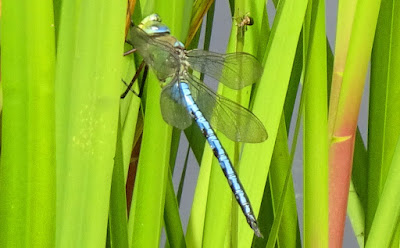 Emperor Male Lancaster Canal. Pete Woodruff.
Moving on, and just a few paces up the track there's this dragonfly patrolling Cam Brook, conspicuous in its large size and predominantly all-blue abdomen, it had to be Emperor Dragonfly, apparently having deserted its still water and canal habitats, and is regarded as absent in the uplands....But not today!
Sightings have been quite sparse here this year, and I struggled to find just one male Stonechat on Hawthornthwaite this time, with my only confirmed breeding record being that of six birds seen 27 May including two young. Up to 24 Sand Martin are still active at the small colony, 5 Meadow Pipit, and a Green-veined White noted.
Though the weather didn't contribute, it was a disappointing search along Cam Brook, with five seen here 11 July, just one Golden-ringed Dragonfly and a Brown Hawker seen, also 3 Grey Wagtail on the brook, and up to 8 Sand Martin were still attending four nest holes at the small established colony here.
On Grisedale Brook, 5 Golden-ringed Dragonfly was the total count between Grisedale Bridge and Holme Wood, with a Buzzard 'mewing', and a Raven calling 'korrp-korrp' overhead. 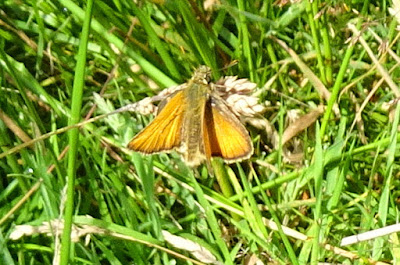 Small Skipper Grisedale Bridge. Pete Woodruff.
Butterflies at Grisedale Bridge, 8 Meadow Brown, 6 Small Heath, and a Small Skipper.
Thanks to Steve Graham for the excellent header image of the Beautiful Demoiselle he saw whilst visiting the deep south recently. I think you would struggle to find one in our recording area in Lancashire, with only one of three recorded in the county, all in unsuitable breeding habitat, including 19 years ago at Middleton NR in 2003.