After the promising and much-heralded blip back in February which lulled us into believing that spring was well under way, things have returned defiantly to winter once more! Of course, it may be colder and wetter than it was a couple of weeks ago but on the face of it, it’s more like a normal early-mid March. Though unlike last year’s ‘Beast from the East’ we’re currently on the receiving end of what might be termed the ‘Pest from the West’! The days however are getting longer and a little milder (honest); these are the real cues that signal changes in nature. 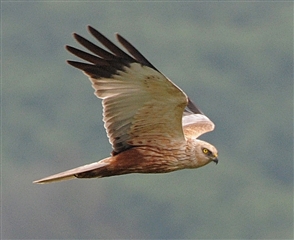 Our marsh harriers (photo by Mike Malpass) have been busy sky-dancing, when conditions allow, and some observed behaviour suggests early pairing may have taken place. One couple in particular spend a great deal of time together and look to be prospecting nest sites in the reed bed. The best places from which to view the harriers at the minute are the Skytower and Lilian’s or Grisedale hides.

Other indications of a looming spring include the continued, if sporadic, arrival of sand martins. Ones and twos have been seen primarily over Causeway Pool. These diminutive long-distance migrants are amongst the first of our summer visitors to arrive and here at Leighton Moss we can see gatherings of several hundred feeding over the meres by April. There is always the fear that some of these early pioneers may succumb to poor weather and a lack of flying insects to feed on, but if they get it right and survive it allows them to take the pick of the prime nesting sites before the later birds arrive.

Avocets (photo by David Mower) too continue to gather at the Allen and Eric Morecambe pools having spent the winter further south. The current high water levels are encouraging for these island nesters, assuming they can find a good spot before the black-headed gulls establish their territories. Numbers of these elegant waders often fluctuate quite a bit before the breeding colony gets settled. 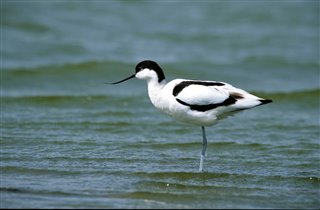 So far, we haven’t been able to confirm any bittern booming – despite concerted efforts to listen during optimum conditions. Last year we had a male ‘tuning up’ in the second week of March but it’s still early days and we can hope to hear this distinctive sound as soon as the weather calms down a little! Whether any of our wintering birds departed during the warm spell back in February remains to be seen.

The forecast for the coming week doesn’t exactly inspire us to feel optimistic about more spring arrivals but as soon as we get a little shift to the south in the winds we can expect things to change significantly. Wheatear, osprey, little ringed plover, garganey, chiffchaff and a host of other early migrants will take advantage of a change in wind direction and positively pour in from the continent and beyond.

Meanwhile, visitors can enjoy superb views of many species of wildfowl and waders, along with regular otters and a wealth of woodland birds.

If you are planning to visit us soon, do check out our programme of events and see if there are any guided walks or activities that you may wish to join us on!

Immediately following the much-talked-about ‘Beast from the East’, things calmed down quite a bit and it seemed that spring was keen to forge ahead. Birdsong on the reserve has certainly ramped up a few notches; chaffinches, reed buntings, nuthatches, marsh tits and the like are all in fine voice, declaring territories and proclaiming their suitability as ideal mates for the breeding season.

Most excitingly, we have had bitterns booming from two different areas of the reserve. One or two of these secretive herons have been seen regularly throughout the winter, mainly from the Causeway and Lower hides but thanks to their cryptic lifestyle it’s an impossible task trying to figure out just how many we have out there. It’s only in spring when on calm, clear evenings and some of the bitterns prepare to migrate that we can hazard a guess as to the wintering population. When conditions are just right, the bitterns will rise from the dense reed beds at dusk and fly over the reserve calling. This sound is nothing like the famous boom but is more like a gull call. On some evenings, we can witness multiple bitterns circling and ‘gull-calling’ in the fading light – quite magical!

The potentially thrilling part of hearing this year’s booming birds is the possibility that some bitterns may remain to breed at Leighton Moss. A great deal of work has gone into improving the reed bed for bitterns and it would be a fantastic reward for the ecologists and wardens involved in that extensive management to see young bitterns fledging on site again. We’ll keep listening for the evocative booms and keeping our fingers crossed!

In other news, the marsh harriers have been showing exceptionally well, with up to six birds present at the time of writing. Two dazzling males have been sky dancing and food-carrying in their attempts to impress the females.

Out on the saltmarsh, avocet numbers have been building up again, though with the forecast cold conditions due over the next few days we may well see them disappearing for a short spell once more before they settle down to breed. A new anti-predator fence was installed at the Allen Pools this week to prevent foxes from raiding the avocet nests later in the season.

Our first sand martins of the year appeared briefly on Wednesday (14) with another present at Causeway for much of the following day. Despite the un-spring-like conditions we should see a few more of these dainty long-distance migrants in the coming days, along with the first chiffchaffs and wheatears if we’re lucky. A subtle and favourable change in wind direction should see an increase in the number of birds arriving and we can hope to add little ringed plover and osprey before the end of March.

Meanwhile, the starling murmuration, while still occurring, is starting to peter out a little. We still have a few thousand birds coming onto the reserve to roost but their display seems less extensive now and their numbers have certainly dwindled. How much longer will they be with us?

Visitors to the reserve may have noticed that we have put a few more small islands out on the Causeway Pool. This is primarily to attract nesting birds, though they’re pretty useful for roosting on too. We’ll be keeping a close eye on them to see which birds find them useful!

In this blog Andy, our residential volunteer reserve warden, reflects on the rainfall over the past few months, wildlife on the reserve and the work of the warden team during the winter season. As we shall see, Andy really has come to appreciate gettin…

With work to the Eric Morecambe Pool now complete and water flooding the exposed mud, waders are starting to make the most of the newly restored habitat. Large flocks of redshank and lapwing are a rather nice spectacle of late. Amongst them, one may se…